SLO County supervisors fire back at state ag board

A confrontational morning session of the Nov. 5 San Luis Obispo County Board of Supervisors meeting ended in the narrow approval of a written retort to the California State Board of Food and Agriculture, which recently criticized SLO for its handling of water policy over the Paso Robles Groundwater Basin. 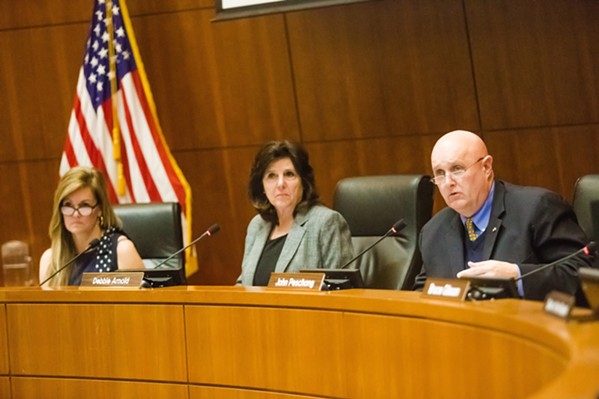 The supervisors' 3-2 vote delivered the four-page response letter, in which Chief Administrative Officer Wade Horton wrote that the county "adamantly disagrees" with the state ag board's complaint that commercial agriculture was insufficiently involved in the development of a groundwater sustainability plan.

"I read the letter in disbelief," 4th District Supervisor Lynn Compton said of the state's letter on Nov. 5. "It's just beyond ridiculous."

The sustainability plan is required by 2014's Sustainable Groundwater Management Act, and Paso's is in final draft form, with a deadline of January 2020 for submission to the state.

The state ag board—an advisory board of the California Department of Food and Agriculture—told SLO County in a Sept. 30 letter that it'd "heard from so many people from the agriculture community in the Paso Robles area ... we felt it important to reach out to you." The letter highlighted "a concern about the limited outreach and engagement of irrigated agriculture" in the sustainability plan development.

In the county's retort, Horton recounted years' worth of outreach related to the Paso basin since the 2011 drought.

"We are proud of the efforts we have made in outreach and education to all of the diverse stakeholders in the Paso basin," the county's letter states.

Supervisors and community members bickered at length over the letter and the merits of the ag board's assertions.

Jerry Reaugh, a board member on the Estrella-El Pomar-Creston (EPC) Water District, echoed the sentiments of the ag board and pointed to the supervisors' vote last year to deny his district a seat on the committee that's crafting the sustainability plan.

"The policy of this board appears to be the concerted effort to not include irrigated ag in the process," Reaugh said. "The EPC Water District was specifically excluded from the process."

But others involved, like county Water Resources Advisory Committee member Greg Grewal, thought that the complaints were just "sour grapes." Grewal said the county should be cautious in consulting agricultural interests over the basin.

"They had plenty of input," Grewal said. "These people have driven the bus over the cliff and into the river, that's why we're at this situation that we're at now. It just so happens that the river's dry."

Board of Supervisors candidate Ellen Beraud, who's challenging 5th District Supervisor Debbie Arnold in the 2020 election, also chimed in. She said she's been "dismayed by the lack of engagement" with agriculture regarding the sustainability plan.

"Local government should be the most responsive to the needs of the constituents," Beraud said. "Just writing a letter and citing meetings I don't think is an adequate response."

After public comment, the board started a heated dialogue about the issue. Second District Supervisor Bruce Gibson was most pointed, saying he felt that "a huge swath of irrigated agriculture" had been disenfranchised in the water planning process. He called the draft plan "frankly weak," and said that "any weaknesses in that plan is not the fault of our staff; that fault lies directly with the elected officials installed as decision makers in that process."

"I can't even say I understand it," Hill said. "This kind of thinking and action has led to serious dysfunction. It goes well beyond this."

While Gibson and Hill voted against the county's response, supervisors Compton, Arnold, and Peschong (1st District) supported it and defended their approach.

Reacting to Gibson and Hill, Compton accused the supervisors of trying to harm Arnold's re-election and said that the complaints from agriculture were really about looming water pumping cutbacks.

"The problem is irrigated ag is not happy with this plan. They're using the bulk of the water, and they're going to be asked to cut back," Compton said. "What this is all about is an election going on, and you have two supervisors that are aiding and abetting to try to dislodge one supervisor."

"I actually think we've done a pretty good job," Peschong said. "The plan has to be taken by a vote of the four members of the cooperative committee. Everybody has an equal voice there." Δ