San Luis Obispo County's search for its next top elections official continued down its bumpy path on Oct. 5, when county supervisors voted to interview the three committee-recommended finalists for the job.

The 3-2 vote came amid accusations from two supervisors—as well as some citizens and clerk-recorder applicants—that top county officials ignored a board directive that asked the committee to forward seven candidates and to not consider prior election experience as a prerequisite.

"I guess every once in a while our motions will just be ignored and that's how we're going to govern this county," 5th District Supervisor Debbie Arnold said at the meeting. "How do I justify that to my constituents?"

On Sept. 20, the selection committee of five supervisor-appointed volunteers (including two retired municipal clerks) voted unanimously to send acting SLO County Clerk-Recorder Helen Nolan, Santa Barbara County Elections Division Manager Elaina Cano, and former Yolo County Chief Deputy Clerk-Recorder Jeffrey Barry to the board for final consideration. A handful of other candidates were discussed but did not receive majority support from the committee.

At the board's Sept. 28 meeting, Arnold expressed frustration with the limited pool of candidates and made a motion to agendize a discussion about adding more candidates to the mix. On Oct. 5, after a week of fierce community debate, 4th District Supervisor Lynn Compton was the deciding vote to stop that push. 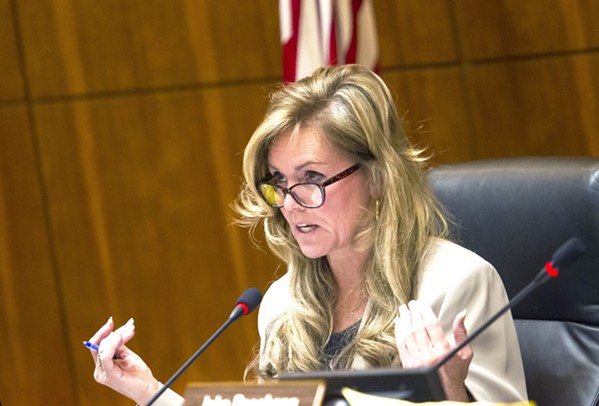 "It was a rock and a hard place," Compton told New Times on Oct. 6, "and I just felt like the best way to move us forward was to at least go through with these three interviews and ... if it doesn't work, come back."

Opponents of that, like 2nd District Supervisor Bruce Gibson, saw the move as an attempt to ram unqualified candidates into the vacant clerk-recorder position in time to oversee county redistricting and a March 2022 primary election that involves three open supervisor seats, including Gibson's, Compton's, and 3rd District Supervisor Dawn Ortiz-Legg's.

Gibson and others also highlighted efforts by the Republican Party to undermine elections by propagating false claims that the 2020 election was stolen from former President Donald Trump.

"In my view, there's only one reason to invite the interview of unqualified candidates and that's to subvert the election process in this county," Gibson said.

Compton said she was in a particularly tough position given that one of the proposed candidates, Jenkins, had previously represented her in a 2018 lawsuit she filed against the Clerk-Recorder's Office, where she tried to stop certain ballots with unresolved signatures from being counted during a tight election. Compton's choice for the selection committee, Charles Bell, also represented her in that lawsuit.

Although the law wouldn't have required it, Compton said she would've recused herself from voting for Jenkins as clerk-recorder. She acknowledged that the appearance of a conflict of interest played a role in her voting down Arnold's motion on Oct. 5.

"It just complicates everything, and I was trying to do the right thing," Compton said on Oct. 6. "I thought it'd be perceived as corrupted if we then threw in personal candidates. ... I don't think I made anybody happy yesterday."

First District Supervisor John Peschong supported the request for more candidates. He dismissed residents' suspicions of an ulterior agenda and decried emails that called him a Nazi and fascist.

"It really upsets me," Peschong said. "We're talking about candidates that are going to come in a open and transparent process."

Compton agreed with Arnold that "there were definitely screw-ups" in county staff's administering of the selection process, particularly from Chief Administrative Officer Wade Horton and County Counsel Rita Neal, who headed the selection committee meetings.

Ortiz-Legg defended staff and said the board's target of seven candidates "was merely a suggestion." She fought back tears when talking about the ways she's seen staff criticized and "demoralized" through the process.

"These people are really just trying to keep balance here on this crazy chaos that's happening," Ortiz-Legg said. "In some ways, changing the narrative of all this is almost a self-fulfilling prophecy of distrust and destroy and creating chaos, and that's what we don't need."

Supervisors will interview the three candidates for clerk-recorder on Oct. 12. Prior to the discussion on Oct. 5, the board voted 3-2 on a motion by Peschong to hold a future discussion about potentially making it county policy to send any future vacancy of a countywide elected position to a special election. Δ