Attempting to make reforms to its jail after a string of high profile inmate deaths, the SLO County Sheriff's Office created a new position to oversee all aspects of medical and mental health services for its jail population. 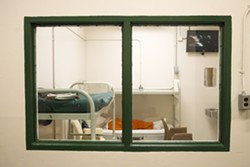 The SLO County Board of Supervisors approved the creation of the new position of sheriff's chief medical officer (CMO) at its Feb. 20 meeting. According to SLO County Sherriff Ian Parkinson, the CMO will be responsible for all clinical decisions, policies, and operations related to inmate care, welfare, and treatment.

"They are the one point of contact focused on inmate care," Parkinson told members of the board.

The creation of the position represents a marked shift from how medical and mental health services have been provided at the jail. Previously, they were managed by three different agencies within the County Health Agency. A 2017 report from the SLO County grand jury noted that the structure raised concerns about how inmate care was coordinated. The new position would consolidate management and delivery of inmate services and care under the custodial authority of the Sheriff's Office.

"For years ... the sheriff was not in charge of medical and mental health [at the jail]," Parkinson said. "You basically had three chefs in the kitchen."

The search for someone to fill the position will begin immediately. Once hired, the CMO will make $337,999 annually in salary and benefits. Since June of 2017, county Deputy Health Officer Dr. Christy Mulkerin has been serving as the sheriff's interim CMO.

The creation of the CMO position was part of a larger presentation by Sheriff's Office and county health officials on efforts to address concerns about the treatment of jail inmates, particularly those suffering from mental illness. In addition to plans to open up a new medical facility and create space for a mental treatment wing, the jail has already made other changes, including updating its safety cell policy, implementing an electronic health records system for inmates, expanding its mental health screenings, and providing training on mental health and crisis intervention for custody staff.

"They are significant operational changes," Parkinson told the board members.

More of those changes are likely on the way. The new CMO will also play a role in helping to determine whether mental and medical health services at the jail should be contracted to an outside vendor. Parkinson said the CMO will help evaluate current services at the jail, which may lead to a recommendation to contract out the services.

"It's not a foregone conclusion," he said.

The push for reforms at the jail was spurred by public outcry over recent inmate deaths, including that of Andrew Holland, a mentally ill man who died of a blood clot after being strapped to a restraint chair for 46 hours in January 2017. Holland's death resulted in the county paying a $5 million settlement to Holland's family. Board Chairman and 1st District County Supervisor John Peschong noted the tragedy, but expressed confidence in the progress that was being made.

"We had the worst of all worlds where we had a death at the jail, and I think we've responded appropriately," he said. Δ