A heavily redacted copy of the former aide's complaint states that Hill made unwanted sexual advances and behaved inappropriately toward her after she had ended a consensual but clandestine relationship with the supervisor. 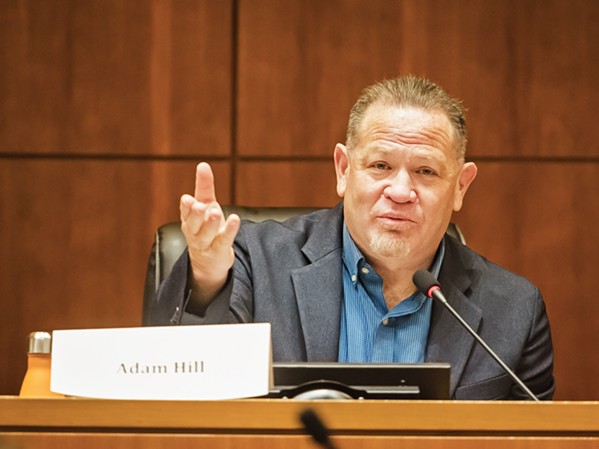 The complaint describes her suffering from "PSTD" over "gross things that happened," citing instances of groping and other unwelcomed touching and comments.

SLO County's Nov. 13 settlement pays the aide—whose name New Times is withholding because she's an alleged victim—six months of salary and benefits exceeding $40,000, and relieves SLO County of liability. Her last day as a county employee was Nov. 13.

"The county treats allegations of workplace misconduct very seriously," county administrators said in a statement on Aug. 13 acknowledging the complaint and an investigation into the allegations. SLO County has since completed that investigation but denied New Times' request for a copy.

The redacted complaint—which was lodged a few weeks before Hill committed suicide on Aug. 6—appears to describe a long and complex relationship that began in late 2017 as a "casual sexual relationship" and started before her employment at the county.

Through 2018 and most of 2019, the two maintained a relationship, but, according to the complaint, she "finally broke it off ... when Hill became upset and 'freaked out' and worried their relationship would become public as a result of the Katie Hill scandal."

Former U.S. Rep. Katie Hill resigned from Congress in October 2019 after she admitted to a relationship with a campaign staff member.

"[Redacted] was upset since they had been in a sexual relationship for a few years and he had previously told [redacted] he would make it public," the complaint states.

Following their breakup, the complaint states that she feared retaliation. Hill allegedly asked her to delete their texts and emails.

"He would get angry often and lash out, pounding his fists," the complaint reads.

Hill's alleged sexual misconduct continued periodically through the first half of 2020, according to the complaint, as the employee offered him both professional and personal support during his decline in health.

"[Redacted] supported Adam Hill with his mental health issues, both during and after their consensual sexual relationship," the complaint reads. "[Redacted] felt bad about abandoning him. ... [Redacted] just cared about him and felt sorry for him."

In October, the SLO County coroner's investigators ruled Hill's death a suicide due to an intentional lethal overdose of cocaine and an anti-anxiety medication.