San Luis Obispo County Public Health Officer Penny Borenstein looked pained at a May 5 press briefing when a reporter asked for an update on the county's progress toward COVID-19 herd immunity, five months into the vaccine rollout.

"Locally, we are really falling behind," Borenstein said. "The state average at this time is 61 percent of all eligible people, 16 and up, have at least started vaccinations. In our county, we're more like 51 percent. ... We're really not doing a whole lot better than half, and we want to get upward of 80, 85 percent to achieve herd immunity. 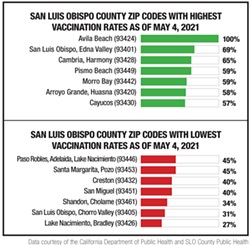 "With the falloff we're seeing," she continued, "it really is breaking my heart to see that folks aren't taking advantage of this opportunity."

Two days later, on May 7, Borenstein announced that SLO County would be closing its three mass vaccination clinics in Paso Robles, Cuesta College, and Arroyo Grande on June 4, due to declining community demand.

A few weeks ago, SLO County expanded vaccine eligibility to all residents over age 16 and hit a peak in April of administering more than 10,000 shots per week, but that trend quickly turned in the other direction.

During the first week in May, SLO County saw vaccine appointments drop by nearly 50 percent. The drop-off—which is happening across the country—has caused the SLO County Public Health Department to shift gears on its immunization campaign, focusing more on targeted outreach and mobile vaccine drives to reach those who are either hesitant about the vaccine or hard to access.

"I understand there's a lot of hesitancy out there," Borenstein said. "We want to be open, we want to listen, we want to hear every piece of information. ... The pandemic is not going to go away unless we all do this in the same time frame."

A bird's-eye view of SLO County's vaccine progress shows about half of eligible residents have received at least one shot—a pace that trails the state by about 10 percent. A closer look at the data—broken down by ZIP code, age, and ethnicity—sheds more light on where the rates are particularly high or lagging.

In totality, SLO County lags in almost every vaccine metric compared to progress at the statewide level, with one exception: a slightly larger proportion of the 65-and-older population is vaccinated.

"There's always going to be a proportion of the population who don't take any vaccinations," Borenstein said during the May 5 press briefing. "That's not the group we'd like to talk with, because quite frankly, I don't think we're going to change hearts and minds. There is a very large group—it's probably about one-third—who have a wide variety of concerns and information gaps, and access issues in some cases, and just think they don't need it or are concerned about side effects. We'd like to have those conversations with people to help them make decisions and hopefully get them to a place where they're ready to say yes to a vaccination."

Locals' hesitancy around the vaccine can be attributed to factors like a distrust of government, concerns about side effects, a lack of understanding about the vaccine's efficacy or safety, political influence, and religious concerns, according to an April 14 SLO County Vaccine Task Force presentation.

The most revealing indicator of vaccine attitude, according to a Kaiser Family Foundation report that was embedded in the Task Force presentation, is political party. While 2 percent of Democrats said they "definitely won't" get the vaccine, 28 percent of Republicans responded that way.

Borenstein asked that locals who are skeptical of the vaccine talk to their personal doctor, visit the Centers for Disease Control website, or call her office.

"Vaccinations and clean water are probably the two most important public health accomplishments ever in human kind," Borenstein said. "Please take advantage of these next few weeks [that the local mass clinics will still be open]."

Once SLO County closes its clinics, residents can still receive COVID-19 vaccines at pharmacies like Rite Aid, Walgreens, or CVS.

Public Health will then shift to a more targeted vaccination campaign. The department is now accepting applications for mobile vaccine clinics that can serve up to 200 people. Organizations, businesses, and other community groups can apply at recoverslo.org/mobilevaccine for the on-site service, at no cost.

"Any business, church, nonprofit, community center, organization, or housing situation that would like for us to come to you, we are ready and willing and able to do that," Borenstein said. Δ