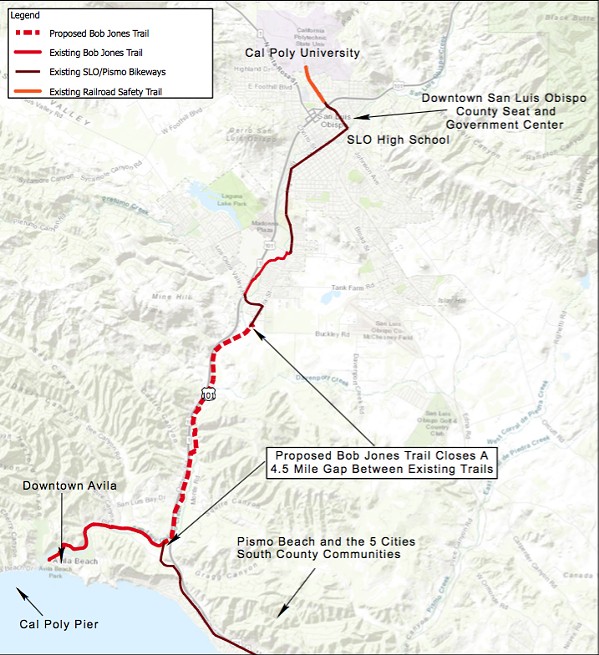 After winning an $18.2 million transportation grant, San Luis Obispo County and open space advocates are now closer than ever to achieving a dream of completing the Bob Jones Trail—but one county supervisor's "no" vote at a July 13 meeting foreshadows the challenges still ahead to get the trail to the finish line.

Since the early 1990s, the county has planned to connect the city of SLO to Avila Beach, and the recent grant would fully fund finishing the trail's remaining 4.4 miles. This new stretch will traverse the fringes of 16 parcels of private property next to Highway 101, and county officials say they have verbal agreements from 90 percent of affected property owners to donate or sell easements on their property to accommodate the trail.

But over the past two years, one owner has not allowed county contractors to enter his property to do preliminary survey work for the trail.

The county says soil-boring tests are necessary on the edge of the 80-acre property owned by Ray Bunnell to properly design one of the trail's bridges over SLO Creek.

Bunnell, who leases the property, stated in court documents: "I want to be perfectly clear. I am absolutely not a willing seller or donor."

After being denied entry, the county filed a lawsuit in SLO County Superior Court to try to compel his agreement under eminent domain law. The June 3 lawsuit states that Bunnell's property is critical to the project and that the survey work must be done in the next few months to stay on track to avoid jeopardizing the $18.2 million grant.

Bunnell's attorney did not respond to New Times' questions on the case before press time.

At the July 13 Board of Supervisors meeting, 5th District Supervisor Debbie Arnold said she is opposed to using eminent domain for the project. She pointed to a county general plan policy that states that eminent domain "will not be used for trail establishment."

She then voted against accepting the state grant.

"I really believe these are important property rights statements that our citizens in this county depend on," Arnold said. "To this point, we still have a least one unwilling seller that's written consistently over many years that it would be unavailable. ... I don't think we should accept the funds until this issue is resolved."

The other four supervisors voted to accept the grant, and now a timeline needs to be followed. To meet the grant's conditions, the trail must be finished and opened to the public in 2025.

"Working back from 2025, this preliminary information needs to be obtained in 2021 so that project plans can be completed, a construction contract awarded, and the project constructed," the county argued in court documents.

A hearing in the eminent domain case is scheduled for Sept. 23.

Local officials learned in March that they'd beat out hundreds of competing applications from around the state to win the $18.2 million Active Transportation Program (ATP) grant for the proposed 4.4-mile trail connector.

"It's one of the largest transportation grants the county has ever received," said Nick Franco, director of SLO County Parks and Recreation.

After applying unsuccessfully for years, SLO County received the second highest-value ATP grant of the 50 projects picked for funding this year by the California Transportation Commission—out of more than 400 applicants.

As plans move forward, Franco said that the county has not had a real chance to start right-of-way negotiations with property owners yet. The trail must first get to a 60-percent design point, which it's close to. Franco said ultimately, eminent domain is a decision that the Board of Supervisors makes.

"It's something the board chooses to do or not to do. That's not our intention or our plan," Franco said. "Our plan is to work with the landowners and get to something that's good for everybody."

At the board meeting, Arnold wasn't the only supervisor with reservations. First District Supervisor John Peschong said he also does not support eminent domain, but voted to approve the grant to see how the right-of-way negotiations go.

"That's probably going to be the toughest thing out of this," Peschong said.

Concerns from property owners about the trail include the potential impacts of homeless encampments, fire risks, and trespassing, according to county officials.

But the trail would also provide some benefits to private landowners, proponents argue. It will be wide enough to accommodate emergency vehicles, providing fire access in a rural area.

While the county is open to negotiating with land owners, the route of the Bob Jones Trail is all but decided—the project's 2015 environmental impact report determined the preferred route to begin at the Octagon Barn on South Higuera Street in SLO and go south, on the east side of Highway 101, along the path of SLO Creek. It crosses the creek three times before going under Highway 101 via an existing underpass, finally connecting to the current Bob Jones Trail staging area on Ontario Road, near Avila Beach.

Moving the trail to the west side of Highway 101, along Ontario Road, makes it nearly impossible to carve out a protected bike and pedestrian path, officials say.

Franco, the parks director, expressed optimism that the right-of-way challenges can be worked out and that the community will see the trail come to fruition.

"People have been working on this for decades to try to get this to happen. There's been all kinds of different funding sources, tons of partners, pulling together to get us to this point. That was really the strength of the application—the broad support for the Bob Jones Trail," he said.

But he added that, "like with any project, I'll never say we made it until we cut the ribbon."

"I think it will happen, but no, I don't think it's a done deal," Franco said. "This is a big project. There's a lot of little hurdles to still clear."

While challenges remain ahead, several supporters of the trail expressed excitement during the supervisors meeting, including Daniel Bohlman, SLO County Land Conservancy deputy director. The Land Conservancy is one of the early groups to back the trail and owns the SLO Octagon Barn, where the Bob Jones' parking lot and trailhead will be located.

Bohlman noted that the community vision "has never been closer to reality than at this moment."

"This grant represents more than just dollars," he said. "It represents thousands of hours ... by the many champions of the Bob Jones Trail who have worked tirelessly to bring this trail to the community." Δ