With Californians facing a new wave of economic disruptions due to COVID-19, San Luis Obispo County officials and social service providers are increasingly concerned about a substantial rise in local homelessness in the near and long terms. 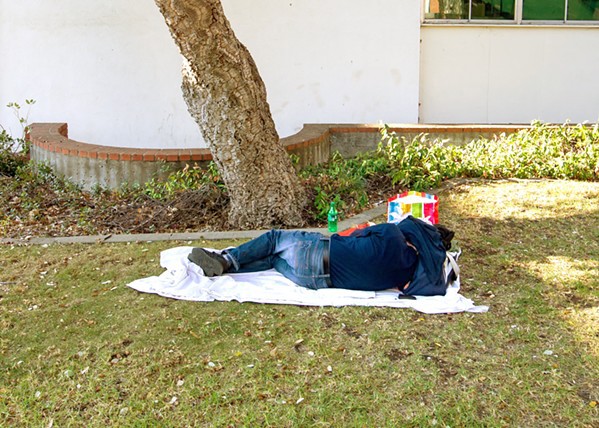 Janna Nichols, executive director of the 5 Cities Homeless Coalition, told New Times that calls for service at her South County nonprofit are already up 50 percent. And while there's a current freeze on evictions statewide until at least Sept. 30, tenants are still on the hook for back rent and many could face eviction as soon as it's allowed again.

"Even though there's a moratorium currently on landlords being able to take action for eviction, it does not prevent them from noticing their tenants, nor does it relieve their long-term responsibility to pay rent," Nichols said.

The recent surge in COVID-19 cases and business closures has only heightened concern among community leaders that many SLO County residents are at risk of falling into homelessness sooner or later.

"The impacts of COVID have created a looming problem ... of potential evictions as folks have lost employment, particularly as we are going in reverse and seeing more shutdowns of different business activities," SLO County 2nd District Supervisor Bruce Gibson said at the July 14 Board of Supervisors meeting.

County supervisors discussed these concerns on July 14 as they decided how to allocate $5.2 million in state housing funds to local initiatives over the next five years. The state funds, generated by a $75 real estate transaction fee and distributed to counties, can go toward home ownership programs, affordable housing projects, and homeless prevention services.

The Board of Supervisors agreed in a 4-0 vote on July 14 to send more of the funds than it'd initially planned to toward homeless services over the first three years. The policy tweak will give local organizations on the front lines of homelessness, such as the 5 Cities Homeless Coalition, about $1 million through 2021 to provide services.

Nichols said that the funds won't likely be available to recipients until October, and no specific nonprofits have been promised the money, but she said that generally the boost is sorely needed amid a crippling pandemic.

"[It's] an ongoing source that no doubt will be needed," she said. "There are going to be people falling into homelessness—we know this." Δ