Let me get this straight. Per the state Department of Alcoholic Beverage Control (the ABC):

You can sell booze with a secure lid (sippy cup?) as long as you post open-container warnings in the restaurant and online.

No deliveries are permitted from 2 a.m. until 6 a.m. (OK, totally cool on that).

Meanwhile, nine U.S. states never locked down. Which means there is someone in Alaska or Wyoming drinking a cold one with his buddies at the pub celebrating their low COVID-19 numbers.

It's been especially bad for our state's bars that don't serve food. Left out and disciplined like the class clown.

The salon kids were finally let out to play—but not until they had to write "I will not spread viruses" 100 times in cursive. When, oh when, will detention be over?

The other day I noticed Whiskey & June on El Camino in Atascadero had their lights on. Was that an open sign I saw? Oh, it was just Daniel Green, the owner, making use of his time being closed. Green said he's trying to figure a way to creatively open. He's been compliant with the lockdown, but the weeks have turned into months. 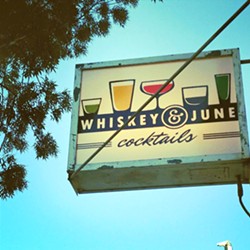 He thinks he may be able to open up his bar and tavern if the restrictions are lifted soon, but he's losing patience not knowing when that date will be. He said the Paycheck Protection Program (PPP) loan didn't make sense to partake in—he didn't think he would qualify for the loan forgiveness, and long-term debt wasn't appealing. Plus, his employees weren't motivated to come back to work when they can make nearly $1,000 per week on unemployment, he said.

"I'm tired of sitting on our hands," Green said. "I think everybody's ready."

"We're going to be one of the businesses that are actually able to re-open, whereas there are many that are not as fortunate, so I'm grateful in that sense, but at this point it's just gotten to be ridiculous," he said.

And his business could follow social-distancing guidelines as well as any grocery store or restaurant, he said.

"I think during a time like this people probably want and need that type of social release more than any other time," Green said, "and to restrict that any further is crazy to me."

I spoke to Donovan Schmit on May 21, the day after he opened two of his bars, with one of his bars now serving a full menu to get back in the game. Schmit co-owns three of Paso's mainstays with partner Troy Larkin: Fish Gaucho, Pappy McGregor's, and 1122 Cocktail Lounge & Speakeasy.

The Speakeasy reopened on a Wednesday.

"It was good," Schmit said, noting it was the first time they had served food at the bar, and the menu had a great reception. "We didn't have any huge numbers or anything like that," he said, "but it was just great to have the staff back, and the guests were so grateful to be back in there."

The building space of 1122 Speakeasy is small and fits only about 30 people. Unlike many bars in SLO County, it has the golden ticket: The building is attached to Pappy McGregor's, and shares a kitchen and an ABC license. As long as it can serve food, it can open in Stage 2 of the CDC guidelines.

"Instead of places just doing chips or Top Ramen to get around the rule, we're lucky we can offer food like sliders and mac 'n' cheese ... pretzel fondue back there—really good, quality stuff," he said, adding that serving food at the Speakeasy is a trial that may possibly go long-term.

Schmit said they shut down all three businesses completely at the beginning—more than two months ago now.

"Everything we did was a decision on what's best for our staff and customers and the community," he said. "We were able to get the PPP loan in the first week, so that took a lot of the stress off."

"We've got the facility and capability of making food, and we're not breaking any rules. Once we saw the other states, we thought, 'Something's got to give in California,'" he said. "It's a relief to get our employees back because our PPP money literally ran out this past Friday, and we were able to open on Friday. I know there are a lot of businesses out there that it didn't happen for, so we are really fortunate, the way it worked."

Schmit can see the conflicting information in the new CDC guidelines. The bar-rail situation, for instance—people need to be 6 feet from drink preparation, so all bar rails have to be closed, even if the bar is long and the stools can be set away from the well.

Restaurants have to be at 50 percent capacity, so why can't bars, he asked.

"I feel like if we can social distance in a restaurant setting, I don't see why we can't do it in a bar setting," Schmit said, noting that he'll abide by the rules, even if it hurts financially.

"We can still social distance when they're drinking. We can spread out tables. And if groups of us can congregate and it can be friends and family at a restaurant table, why can't they sit at a bar table and have a beer together?"

Schmit thinks once the rules ease up a bit, things will start getting back to normal.

"I think for Paso, we're super fortunate just being in wine country. As soon as the hotels can start filling up and the wineries can start reopening, the tourists are going to pour back in," he said.

"I always try to look at the bright side," he added. "This isn't forever. It's definitely a rock in the boat, but calmer waters are hopefully ahead." Δ

Flavor writer Beth Giuffre is trying to look at the bright side. Send food and drink hot tips to bgiuffre@newtimesslo.com.