He’s been the top lawman in San Luis Obispo County for more than 15 years, but in January 2015, the meticulous and often soft-spoken Gerry Shea will no longer be district attorney for the County of San Luis Obispo. 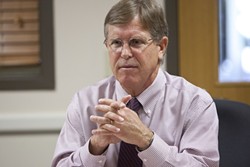 On Nov. 18, Shea—the county’s longest-serving district attorney in more than 50 years—announced that he won’t seek re-election in the June 2014 primary.

“It is, and has been, a privilege to serve as the district attorney,” Shea said in a prepared statement. “I’m proud of the consistently outstanding work done by the men and women of our office, and I’m grateful to the citizens of our county for embracing our office’s efforts to better serve and protect them.”

Shea, a native of San Diego, began his professional career as a deputy attorney general with the California Attorney General’s Office in Los Angeles, handling criminal appellate cases for the state. He joined the SLO County D.A.’s Office as a deputy D.A. in 1977 and was promoted to chief deputy in 1985. He was elected as county D.A. in 1998, and easily re-elected in 2002, 2006, and 2010.

He’s past president of the California District Attorney’s Association and a founding member of the county’s Anti-Gang Coordinating Commission. According to his office, Shea has placed a higher emphasis on helping victims of crime and enhancing services to the public in response to elder abuse, gang activity, environmental crimes, juvenile crimes, and real estate fraud during his tenure.

Despite his successes, Shea told New Times in a phone interview that whoever takes his place will oversee an important time for the office, including a number of challenges that would impact the incoming D.A.’s first term, which is set to begin Jan. 6, 2015. Namely, he said, the court is beginning to implement a new case management system, which seeks to better link the court and the different law enforcement agencies across the county.

“If we can be effective in that, it would be a great link between all the agencies,” Shea said.

In 2004, California voters passed Proposition 69, the DNA Fingerprint, Unsolved Crime, and Innocence Protection Act, which promises to expand the state’s DNA database in an effort to reduce the number of local “cold cases.”

“We’ve got to be ready for those,” Shea said.

Lastly, members of the D.A.’s Office currently participate in a number of other local and state agencies to combat what Shea called “out-of-county” gangs  that operate locally.

“I still see that as one of the major issues we have to deal with,” Shea added.

Since his inaugural term, he’s run unopposed in every election. Asked about the timing of the announcement that he wouldn’t run again in June 2014, Shea said he had anticipated staying for at least one more term, but personal family matters caused him to rethink that decision. He said he made the announcement now in order to allow prospective candidates to begin planning campaigns.

“I will entrust the stewardship of the office to the next D.A.,” he said.

The same day, Deputy D.A. Dan Dow announced his intention to run for the office. Dow couldn’t be reached for comment as of press time, but according to his LinkedIn profile, he’s been with the SLO County D.A.’s Office since December 2007 following two years with the Riverside D.A.’s Office, and three years in sales with Sun Microsystems and Acer. According to his profile, he also has six years experience as a linguist with the U.S. Army and seven years as legal counsel for the California Army National Guard.

The filing deadline for the June ballot is March 7.