The recently released 2019 homeless Point in Time Count and survey results show a 32 percent increase in the number of individuals experiencing homelessness compared to 2017.

Aside from the increase in the number of homeless people counted, the 2019 census differed from 2017's because it was met with challenges, including weather and misconceptions about the survey, according to Laurel Weir, the county's homeless services coordinator. In January, the county received heavy rains that Weir said displaced many individuals. 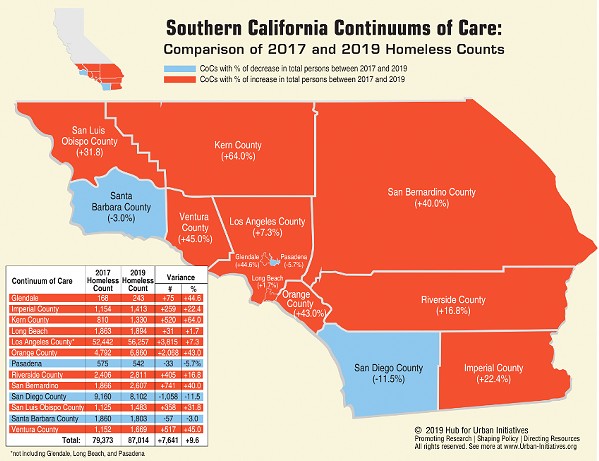 "That resulted in a lot of waterways being cleared out prior to the rains coming in. For example, the city of Paso Robles went through and cleared out a lot of the riverbed," Weir said.

In North County, she said, there was a huge effort to clear out the creek and riverbed in order to keep inhabitants from drowning. As a result of that effort, Weir said there was a concern among members of the homeless community who thought the census was a way to report their locations to the police. It led to fewer survey participants, Weir said.

"I think a lot of folks felt that was an effort to just move them out of town, which wasn't the case," she said.

The biennial census is intended to provide a snapshot of the population, which allows the county to measure trends in homelessness over time.

About 79 percent of persons counted in 2019 were considered to be unsheltered and 21 percent were sheltered. Most of the homeless persons surveyed were either from this county or had a connection to the area, according to the report, and 74 percent reported becoming homeless while living in SLO County. Atascadero was the most frequent place of residence at the time of housing loss (17 percent of survey respondents).

But Weir said the percentages from the census are just one factor that the county takes into consideration when trying to understand its homeless population.

"We work with all the providers, we look at the data, we listen to what the providers are also telling us about what they're seeing and use that to try to get the best picture that we can," she said.

The Community Action Partnership of SLO (CAPSLO) is seeing a sharp increase in individuals with mental health issues and substance abuse at its 40 Prado shelter, according to the organization's deputy director, Grace McIntosh.

In order to serve those particular clients, McIntosh said, the facility is now offering primary care services four days a week. With this service, clients get primary medical needs met and then are offered services with 40 Prado's substance abuse and mental health partners.

El Camino Homeless Organization (ECHO) President and CEO Wendy Lewis said that the census results didn't come as a surprise, especially the 37 percent increase in families (15 percent of the total homeless population) and 78 percent increase in veterans (10 percent of population) experiencing homelessness. She said those results are what ECHO is seeing come through its doors.

The Atascadero organization provides shelter and a 90-day program to help homeless individuals, couples, or families develop an action plan to become housed. The increase they're seeing is why ECHO has been working to keep the facility open 24 hours and create an additional 10 beds. The facility currently operates from 4:30 p.m. to 7 a.m. (more recently 9 a.m.), but Lewis said those hours have hindered ECHO from providing needed services to the people who want them.

"So at 9 a.m. we might have a mom and her 2-week-old; she has to go out in the community and navigate her day," Lewis said.

If ECHO gets the OK from the Atascadero Planning Commission—a hearing is set for Aug. 6—and the City Council, Lewis said the mom in the scenario would be able to be with her infant in a safe environment out of the heat or cold all day.

The approval would also allow the facility to continue to increase its programming, which includes financial literacy, parenting classes, and other opportunities for children, such as a scholarship to the local Boys & Girls Club.

According to the National Low Income Housing Coalition, the fair market rent for a two-bedroom apartment in SLO County increased by 17.8 percent from 2017 to 2019; whereas, the average hourly wage for renters increased by only 9.2 percent.

"The data that has been most clearly shown to be correlated with the rates of homelessness in a particular community has to do with the cost of housing and housing affordability for low-income renters," Lewis said. Δ