The San Luis Obispo Diversity, Equity, and Inclusion (DEI) Task Force presented its final policy recommendations to the SLO City Council on Jan. 12—the culmination of four months of meetings centered on how SLO can improve its climate for underrepresented ethnic groups. 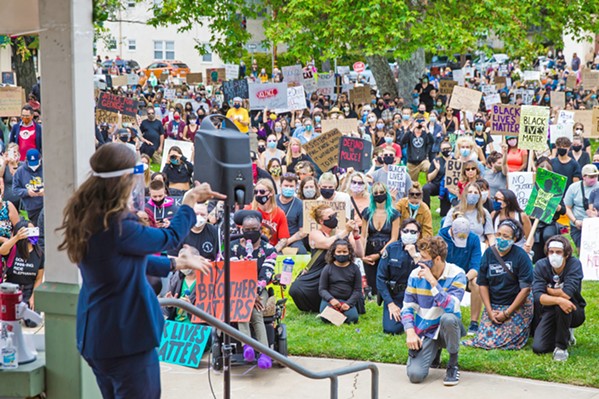 The 12-member task force—assembled in the wake of the Black Lives Matter protests last summer—urged the City Council to name DEI as a major city goal for 2021-23; to create an office for DEI within the city; to develop and implement a DEI strategic plan; to commit to ongoing funding for DEI work at nonprofits; and to empower the Human Relations Commission to help steer DEI efforts in the city.

In presenting the recommendations to the City Council, task force chair Amman Asfaw said the group's approach throughout its meetings was to "lift up the mirror and look at ourselves through a lens of diversity, equity, and inclusion." He said it provided the city the opportunity to address a critical infrastructure problem, like a cracked road or sidewalk.

"This type of work is challenging because it's not something we always physically see," said Asfaw, a graduate student at Cal Poly.

The task force met 14 times between September and January, where it "examined equity gaps and the experiences of SLO's most marginalized communities," according to a city staff report. The meetings involved "learning sessions," where underrepresented community members spoke and shared their stories about living in SLO, a town with twice the percentage of white residents (70.7 percent) as the rest of California (36.5 percent).

"Many tears were also shed during this process," Asfaw said. "I bring that up because this was a very unique effort and initiative by the city in that it required an emotional toll by those that volunteered and partook in it."

SLO City Council members unanimously applauded the work of the task force. Councilmember Erica Stewart—the city's first African-American council member and a task force member—said that SLO must "do things at the foundation of our city to continue to help people be more welcomed and really truly included."

"Sometimes I will get comments of, 'Well these things don't happen here,'" Stewart said. "If I could tell you the many stories [that were told throughout the task force meetings], I would share them all with you right now. While we do have a fantastic community ... we have to recognize not everyone has that great experience."

"This is the beginning of what will no doubt be a decades-long conversation," Mayor Heidi Harmon said. "I just want to encourage people to stay committed to this process and to keep putting pressure on myself and the rest of council. We need to be in it for the long haul." Δ