On Jan. 17, the new San Luis Obispo City Council took a big step away from using increased fines to crack down on unruly partying. It voted 4-1 to reject a SLO Police Department (SLOPD) request to establish another “safety enhancement period”—where the fines for party-related violations like excessive noise and drinking in public are doubled—between March 1 and 17.

But, in a later item, the council supported SLOPD developing a pilot program to enable party hosts to register gatherings with the city. 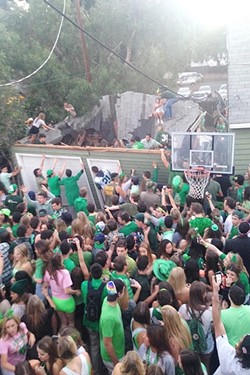 During the meeting, SLOPD Captain Jeff Smith presented an argument for upping the fines in March for party-related violations. He cited the notorious 2015 “St. Fratty’s Day” roof-collapse incident, and he called Cal Poly students’ St. Patrick’s Day parties “unpredictable” and “resource heavy” for law enforcement. He said that the department spent about $30,000 last March on party-related enforcement efforts alone.

“We want to make sure individuals are held accountable for bad behavior,” Smith said.

Safety enhancement periods were a go-to tool for the previous councils to address the party issue. A typical $350 fine for a violation—like excessive noise—doubles to $700 during such a period. The city has enacted doubled fines in the past during Cal Poly’s fall move-in week, Halloween, and on St. Patrick’s day. Smith said the increased fines have been effective in decreasing violations.

Many SLO residents attending the meeting hoped the city would continue down that path.

“We believe SLOPD has devised a program that both considers and is in the best interest of the entire community,” said Sandra Rowley of the group Residents for Quality Neighborhoods. “It’s a minority that party hardy, but the disruptions caused by this minority are significant and affect permanent residents and student residents alike.”

But just as many Cal Poly students showed up to speak against the measure. The Cal Poly Associated Students Inc. passed a resolution opposing it with 401 signatures from students and community members. Students spoke to the feeling of being targeted, mentioned the financial hardship that a doubled fine brings, and questioned why excessive noise constituted a safety issue.

“I have a lot of respect that safety is the biggest concern for this council, but I believe there’s quite a bit of overregulation coming with this,” said Jana Colombini, the Cal Poly student body president.

Ultimately, four of the five City Council members—all except Carlyn Christianson—opposed the proposal. Instead, the council majority showed an interest in pursuing less punitive strategies to resolve the issues between permanent residents and college students.

“I ran [for mayor] on more relationships and less ordinances,” Mayor Heidi Harmon said. “I’m really interested in what it will actually take to build community in SLO. These types of steep ordinances are not part of building that community. Ultimately, I think it’s destructive.”

Harmon suggested switching out the steeper fines with community service for offenders, an idea that Christianson called, “very naïve.”

“I don’t think community service would have one bit of influence over the kind of folks doing this stuff,” Christianson said.

After voting down the doubled fines, the City Council wholeheartedly supported a SLOPD effort to develop a party registration pilot program. The program would enable party hosts to register their gatherings in advance with the police department. If their party received a noise complaint from a neighbor, the host would receive a phone call warning and then have 20 minutes to comply. Party registration programs are in effect in other university cities such as Boulder, Col.

“This is another step toward positive discourse,” Councilmember Dan Rivoire said.

A fleshed-out registration program will come before the council at a later date for final approval.