The last time I attended a film festival, the evening was not what you would call successful. The year was 2011. The occasion? The San Francisco International Film Festival.

Yes, Ewan McGregor was there. Yes, he smelled of success and sweet lemon. Yes, I humiliated myself by accidentally bumping into him as he was exiting the men’s restroom of a theater. Forgive me, Ewan. Your sandy-colored mane and perfect face distracted me.

As such, it was with some trepidation that I approached the awards night for the San Luis Obispo International Film Festival on Saturday. It included three out of the four things that frighten me:

If this were an under-the-sea film festival, there would’ve been some serious trouble. Luckily, it wasn’t and I had nothing to worry about. For 21 years now, SLO has produced a film festival that manages to draw big names and big films while also maintaining the laid-back atmosphere of the Central Coast. That night, the venerable Peter Bogdanovich (Paper Moon, The Last Picture Show) was slated to receive the festival’s prestigious King Vidor Award. Pretty exciting indeed.

So I mustered the strength and put on that dress instead of my usual attire—tiger footie pajamas with bread crumb garnish.

My plus one for the evening, former New Times intern Cliff Mathieson, shows up decked out in far finer duds than me. We’re talkin’ jeans, sweater, and tennis shoes. Cliff, you rapscallion! Who are you wearing? Fred Astaire in Top Hat! Damn boy, you one fancy fox!

To begin this evening of glamor properly, we stopped by Sidewalk Deli for all the film fest essentials—pretzels and a plastic-wrapped sugar bun. Onto the awards!

By the time we get to the Fremont, there’s a line almost to the end of the block. We stake out a spot until we’re ushered into the theater’s radiant, art deco interior. It’s lit up in a glowing flurry of neon pinks and blues.

Almost immediately, I spot festival director Wendy Eidson. She hands me the award I’ll be presenting (“Best Documentary Feature”), and I sit tight for the big moment.

What do I say on stage? Do I make a joke? Do I quote the Nazgul from Tolkien’s Lord of the Rings series and just scream in the highest pitch possible in order that I might find the one ring to rule them all? 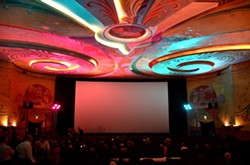 Nah. I just went with a lame one-liner. Moment over; crisis averted. I didn’t trip, and Cliff said I was as smooth as Santana featuring Rob Thomas of Matchbox Twenty.

Now that my part was over, I could sit back and enjoy the main event: Peter Bogdanovich. Jim Dee, of the Palm Theatre, provided an eloquent and comprehensive intro to the filmmaker as Timothy Bottoms, star of The Last Picture Show, presented him with the King Vidor Award (named after the prolific and influential filmmaker whom Bogdanovich actually knew).

For a good half hour, we were treated to some quality Hollywood yarns from Bogdanovich. Like the time he used to hang out with Jack Nicholson and Roger Corman. He offered his opinions on the history of film. When did the golden age of film end?

“When they killed off Bugs Bunny,” Bogdanovich proclaimed.

The night ended on a particularly moving note. When Dee asked Bogdanovich why movies mattered, he recounted what Jimmy Stewart said to him in 1965.

“The wonderful thing about movies [is that] if you’re good, [you’re] giving people little, tiny pieces of time that they never forget.”

Thanks SLO Film Fest for a week many won’t forget.

Jessica Peña has changed comfortably back into her tiger footie pajamas.  You can send her more fashion tips at jpena@newtimesslo.com.