As far as 21st birthdays go, mine was just between Gigli and Howard the Duck in terms of how laughably awful it was. 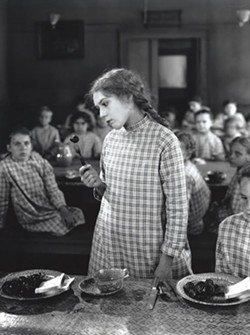 San Luis Obispo International Film Fest’s big 21 is, by all measures, going a lot better than mine. In September, Josh Brolin stopped by for a boisterous screening of his hit, 1980s swashbuckle adventure The Goonies. And, last month, stars Christopher Dennis and Paul Dooley stopped by the Fremont to discuss their Academy Award-winning 1979 film Breaking Away.

Now, for their third and final part of their Coming of Age series, SLOIFF will be going back—way, way back to the young days of film for a screening of the 1919 silent picture Daddy Long Legs.

Look, I get it. Silent films. They’re not exactly the most popular of movies. Heck, given the choice between Gigli and a silent film, I would venture to guess most would choose the former (it’s a sad world we live in). But stay with me here. Silent movies can be cool. I promise!

Daddy Long Legs acts as the tougher, grittier counterpart to everybody’s favorite orphan musical, Annie. It follows the turbulent childhood of Jerusha “Judy” Abbott, played by megastar and co-founder of the United Artists film studio Mary Pickford. As a baby, Judy’s found in a trash can by a police officer, then placed in an orphanage run by the cold-blooded and calloused matron, Mrs. Lippett.

During her tenure at the orphanage, Judy regularly comes in conflict with Mrs. Lippett, even leading her fellow orphans in a string of rebellions and defiant acts. Prunes for dinner every day? “Eating them means our doom,” the girls shout in uproar! After the Great Prune Uprising, we watch Judy grow up and encounter a curious benefactor, who, in a very Great Expectations kind of twist, pays for her education and upbringing in exchange for his complete anonymity. So, she grows up, she becomes a successful writer, enters the upper echelons of society, and soon becomes embroiled in a romantic triangle that may finally reveal the true identity of her own Daddy Warbucks.

OK, so the story may seem a bit “been there, done that.” However, that’s only because Daddy Long Legs has been remade twice and had quite a legacy as one of Pickford’s greatest hits. First, it was adapted into the popular 1935 musical Curly Top starring 1930s sweetheart Shirley Temple (this is the movie that features the song everybody sings whenever Shirley Temple’s brought up in conversation, “Animal Crackers in My Soup”). Then, in 1955, Fred Astaire starred in another musical adaptation—set in France!—with the original title, Daddy Long Legs, intact.

If you’re still with me, you’re probably still wondering, “Sure, that sounds great and all, but silent movies? I need color! I need sound! I need Robert Downey Jr. vanquishing aliens in a neon suit made of fireworks!” Don’t fret! Stick with me. There’s more.

Sure, there are no superheroes and no flashy special effects, but the entire allure of seeing a silent film is that it’s an immersive theatrical experience unlike any other.

The Malibu Silent Film Orchestra will be accompanying the film, in its pristine, re-mastered form. Maria Newman, who composed the score for Daddy Long Legs and a number of other silent features, belongs to the illustrious Newman family of musicians that includes Randy Newman and Thomas Newman, the composer for Finding Nemo and The Shawshank Redemption (a double feature I highly recommend).

Lately, there’s been quite a heated discussion about the status of celluloid in this digital age. Some maintain it has no place, that it’s outdated, and obsolete. Events like this screening most certainly squash that stance into the ground. Silent film doesn’t reflect the death of the art form; it reflects its impressive and innovative debut.

As Roger Ebert once remarked, “An inability to admire silent films, like a dislike of black and white, is a sad inadequacy. Those who dismiss such pleasures must have deficient imaginations.”

Jessica Peña says prunes are for loons! You can contact her at jpena@newtimesslo.com.