Giant pumpkins, surfing stars, broomstick-based sports, and acclaimed filmmakers. The 21st annual San Luis Obispo International Film Festival offers all of these this year in a program of films and events so varied and dynamic, they would make any cinephile’s heart glow. With nearly 100 films, ranging from short documentaries to feature narratives, this year’s program boasts an impressive array of both local and international films. Accomplished filmmakers John Milius (Apocalypse Now, Red Dawn) and King Vidor Award honoree Peter Bogdanovich (The Last Picture Show, Paper Moon) will be in attendance for what’s shaping up to be a can’t-miss event. At New Times, we’ve taken the liberty of seeing some of these fine films, so without further ado, here’s a little preview of what’s to come. 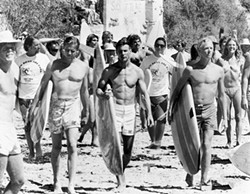 For its 10th annual Surf Night, the SLO Film Fest is making a big splash with a mega double feature. First, look forward to the California premiere of Hollywood Don’t Surf—a feature-length documentary about how surfing works in Hollywood. Spoiler alert: The big screen doesn’t always get it right. The movie features iconic surf scenes from throughout cinema history as well as insights from Quentin Tarantino, Steven Spielberg, and the recipient of this year’s Spotlight Award—John Milius. The acclaimed filmmaker will be in attendance for a screening of his classic surf epic, Big Wednesday. Several stars from the film, including Gary Busey and Lee Purcell, will also be present. See Hollywood Don’t Surf and Big Wednesday (featuring director/writer John Milius) on Thursday, March 12, at 6 p.m., at the Fremont Theatre. 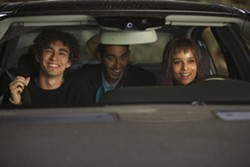 Have Tourette’s syndrome, will travel—that’s the mantra that motivates The Road Within, the opening night selection for the SLO Film Fest. Based on the 2010 German film Vincent Wants to Sea, this indie drama follows Vincent (Robert Sheehan), a 20-something with Tourette’s who has recently lost his mother. After befriending Marie (Zoe Kravitz) and Alex (Dev Patel), the three embark on a road trip to scatter the ashes of Vincent’s mother. Like Vincent, both Marie and Alex have their own personal struggles. One suffers from anorexia; the other deals with intense obsessive-compulsive disorder. Throughout their trip, the three bond over their shared sadness and laughter. See The Road Within on opening night, March 10, at 7 p.m. at the Fremont Theatre. 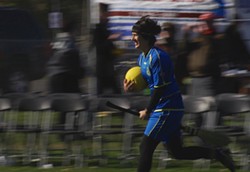 In fall of 2011, thousands congregated on a grassy pitch in New York City for the grandest sporting event in muggle history—the fifth annual Quidditch World Cup. Over the course of a weekend, more than 90 teams from across the world took to their brooms, and Mudbloods captures all the drama, friendship, highs, and lows of this most magical of sports from the wizarding world of Harry Potter. In particular, the documentary focuses on the team from UCLA and their struggle to not only fundraise the money needed to travel to the World Cup, but also their efforts to be taken seriously as a sport by their peers. It’s an underdog story, filled with humor and heartache, for anyone who ever wished they too could sit on a broom and throw balls at each other. See Mudbloods at Mission Cinemas on March 13, at 4 p.m. or at Downtown Cinemas on March 14 at 10 a.m.

This year marks the 30th anniversary of two remarkable feats—the release of everybody’s favorite parlor game, Pictionary, and the premiere of The Breakfast Club. To celebrate the latter, the SLO Film Fest will be screening The classic teenage tale in tribute to John Hughes and this most momentous of occasions. Writer Kirk Honeycutt (former chief film critic for The Hollywood Reporter) will also be in attendance to lead a discussion about Hughes’ life and legacy. Honeycutt’s new book, John Hughes: A Life in Film, was just recently released and explores the expansive career of the man behind nearly 50 films and countless classics. See The Breakfast Club at the Fremont Theatre on March 13 at 8:30 p.m. 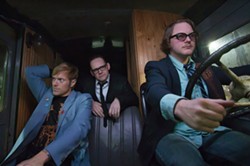 An indie movie about an indie band—that’s about as indie as it gets. Big in Japan is the somewhat fictional story of the misadventures of real band, Tennis Pro. In the film, Tennis Pro is struggling to get off the ground in Seattle when they decide to make a last-ditch attempt to hit the big time in Tokyo. The three band members are pretty endearing, and watching them fumble their way around a culture they only barely understand is lighthearted fun. Tokyo is shot lovingly so the viewer gets to take in the city right along with the band; it’s almost like a mini-vacation. See Big in Japan at La Perla Del Mar on March 12 at 7 p.m. or at The Palm Theatre on March 13 at 7 p.m.

The produce aisle of any U.S. grocery store would not be the same without Frieda Caplan. Throughout the 20th century, Caplan dominated the L.A. Wholesale Produce Market, introducing more than 200 fruits and vegetables to the United States, including the one she is most known for—the kiwifruit. Fear No Fruit chronicles the rise of Caplan, dubbed “The Queen of Kiwi,” from her humble beginnings as a part-time market worker post-WWII to one of the top produce marketers in the country with her company, Frieda’s Inc. Last year, at the age of 91, she received an honorary doctorate from Cal Poly. See the World Premiere of Fear No Fruit at the Cal Poly Spanos Theatre on March 11, at 7 p.m. or at Downtown Cinemas on March 12, at 1 p.m.

The Park Bench, written and directed by Ann LeSchander, follows Emily, an over anxious, obsessive-compulsive graduate student studying to be a librarian as she tutors Mateo, a laid-back undergraduate struggling with American Literature. Their sessions—which take place on a green park bench—get off to a rocky start because of Emily’s critical behavior and Mateo’s apparent disinterest. But before long, the two become drawn toward one another, sharing secrets from their past. Adding a further complication in the story is Emily’s impending marriage to vanilla pharmacist Eddie and her upcoming thesis presentation. Their stories are interwoven with live-action and whimsical animation as their sessions progress. See The Park Bench at Mission Cinemas on March 12 at 7 p.m. or at Downtown Cinemas on March 15 at 10 a.m.

THE MASK YOU LIVE IN

Is there a crisis of masculinity in the United States? Filmmakers Jennifer Siebel Newsom and Jennifer Congdon (Miss Representation) asked that question in their new documentary, The Mask You Live In. Featuring a variety of interviews with sociologists, psychologists, former NFL players, and men of all ages and backgrounds, the film tackles a broad scope of issues pertaining to the ideal and the experience of masculinity in this country. Do we pride athleticism and toughness too much? What about financial success and violence? The Mask You Live In attempts to answer these questions and more. See The Mask You Live In at the Fremont Theatre on March 14 at 3 p.m.
or at Downtown Cinemas on March 15
at 1 p.m.

RISE OF THE GIANTS

Watching pumpkins grow is boring. Watching pumpkins grow to 2,000 pounds? Now you’re talking! Rise of the Giants is a documentary that covers every imaginable aspect of competitive pumpkin growers: the history, the people, the science, the controversies. It’s everything you ever wanted to know about pumpkins and more. It’s actually pretty fascinating to get a peek behind the curtain of a subculture that you probably never knew existed, and growing pumpkins that literally weigh a ton is just mind-boggling. Rise of the Pumpkins also invests viewers in the characters it follows throughout the growing season and ultimately makes watching vegetables (or are they fruit?) about as interesting as possible. See Rise of the Giants at Downtown Cinemas on March 12 at 4 p.m. or at Mission Cinemas on March 13 at 4 p.m.

GIRL ON THE EDGE

A haunting true story about a young girl, Girl on the Edge portrays Hannah Green as she tries to cope with the aftermath of a hazy event that occurs during a party she goes to. Through an app that Hannah uncovers, she meets a boy at the party, and things turn upside down for Hannah in just one night. The next day, pictures start floating around on the Internet. Her father and stepmother, Jake and Anne, seem to have no other choice than to send her to a therapeutic camp in Los Angeles called Maheo Academy. After a while, she finds solace in one specific horse named Betsy. Through the dialogue, this film stirs strong emotions that may have been stowed away in the first place, such as anger, disbelief, and sorrow, not just for Hannah, but also for the others who are included in the complex situation. See the West Coast premiere of Girl on the Edge at the Fremont Theatre on March 13 at 6 p.m. or at the Galaxy Theatre on March 14 at 4 p.m.

Arts Editor Jessica Peña’s out with her Nimbus 2000 broomstick. You can contact her at jpena@newtimesslo.com.