SLO gets a visit from the other torch

As China gears up for the summer Olympics, Tibetans cycle the world in protest

# Eight bicyclists rode into San Luis Obispo on April 12, bearing the Tibetan Freedom Torch en route from San Francisco to Los Angeles, where the U.S. leg of the worldwide torch relay to protest Chinese rule culminated at a rally in front of the Chinese consulate.

According to Kevin Young--president of Santa Barbara Friends of Tibet and who, with the Tibetan Association of Southern California, coordinated the ride--the Tibetan Freedom Torch is following the Beijing Olympic Torch around the world, traveling to 50 cities between March 10 and August 8, when it will arrive at Tibet's border with India. The torch was ignited in front of the ancient archaeological site of Olympia, Greece, on March 10, the 49th anniversary of a foiled uprising in Tibet against Chinese occupation.

Seven of the U.S. riders are Tibetan, including Jigme Norbu, who lives in Indiana and is a nephew of the Dalai Lama.

"We are fortunate to be able to use the Olympics as an opportunity to raise awareness about oppression by the Chinese government in Tibet and other areas," Norbu said. "It is not just a Tibetan issue, it is a global issue."

Lotu Namgyal, a 74-year-old Buddhist monk who spoke through an interpreter about being arrested in Tibet, accompanied Norbu on the ride. Namgyal said he was jailed for five years in Szechwan for possessing religious books. He's been tortured.

And how does he feel about the men who did that?

"As a Buddhist practitioner and monk, he believes in Karma. Things happen to you," the translator related. "The past is the past, but people are still being tortured there we are asking the world for help. We follow the Dalai Lama's middle path."

The Dalai Lama does not seek independence for Tibet but rather a "meaningful autonomy," according to his official website. That "middle path," somewhere between independence and domination, can be reached only through nonviolent means, he wrote.

Congresswoman Lois Capps issued a statement in support of a resolution the House passed on April 9 that condemned police actions to quell recent demonstrations in Tibet surrounding the anniversary of the uprising.

"The recent events in Tibet have saddened many of us, and have served as a disturbing reminder of the suffering that Tibetans continue to endure. The Chinese government's crackdown in Tibet is a sad example of the state of human rights in China, and its overall lack of respect for freedom of expression," Capps wrote.

The resolution passed by a vote of 413 to 1. Rep. Ron Paul (R-Texas) cast the lone vote against the resolution.

A special envoy from President George W. Bush is scheduled to meet with the Dalai Lama on April 21 to discuss engaging Chinese authorities in direct talks with the Tibetan spiritual leader. Aides of the Dalai Lama were talking with Chinese government officials as troops countered demonstrations in Lhasa, but resistance to negotiations with His Holiness has been steep. China has accused him of masterminding violent resistance and deliberately attempting to ruin the Beijing games. 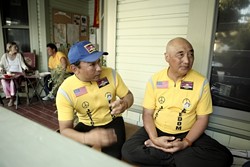 # Chinese delegates stifled an address by Amnesty International about repression in Tibet at the U.N. Human Rights Council meeting in Geneva last month. The organization is calling for U.N. scrutiny of conditions within Tibet and unrestricted access for journalists and other independent observers.

One barometer of rapprochement is the established Asia Society, founded by John D. Rockefeller III more than 50 years ago to promote bonds between the institutions and leaders of Asian nations and those of the United States. What are the prospects that repression will ease in Tibet?

"It could happen, although we have not seen any indications that the situation is easing," said Jamie Metzl, the organization's executive vice president.

Metzl is a former U.N. Human Rights Officer and was the director for Multilateral and Humanitarian Affairs on the National Security Council under President Bill Clinton.

"It appears that the Chinese authorities in Tibet are taking a hard line, particularly in the run-up to the Olympics," Metzl said. As to the possibility of direct talks between the Dalai Lama and Chinese officials, "I think there is a decent chance," he ventured.

Regarding Tibetan autonomy, Metzl said, "We are a nonpartisan organization, so we do not take an official view on that issue, but given that all sides are calling for autonomy of Tibet within China, the only issue is what that means."

"For a Chinese person, they would say Tibet has been part of China for a thousand years, and that was just an episode of ending lesser control," Metzl said. "All the facts in this conflict are open to interpretation."

He explained that the Asia Society is actively working to better relations between the parties: "We are to our offices bringing people together and are in contact with people on all sides of this conflict."

People's Republic of China President Hu Jintao has publicly praised the society in the past.

Peaceful grassroots actions such as the Tibetan Freedom Torch Relay that wound its way through San Luis Obispo can contribute to eventual dialogue, Metz acknowledged, "to keep the pressure up, to make sure people are thinking about these issues."

Editor Ed Connolly can be reached at econnolly@newtimesslo.com.