After a bowling alley, concert venue, and restaurant/bar fell through for the vacant corner of Chorro and Marsh streets in downtown San Luis Obispo, owner Jamestown Premier SLO Retail now has something different in mind—and it's tall. 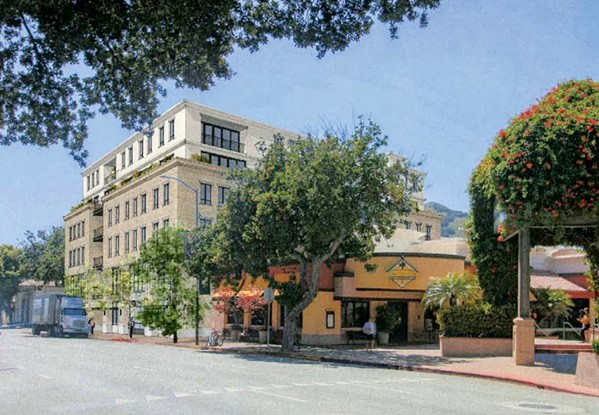 "We took a much broader look at what was really needed in the downtown and what we could do with that property, which is a really key piece of property," Mark Rawson, an architect on the project, told members of the SLO Architectural Review Commission (ARC) on Dec. 3.

Rawson said the developers are looking to move away from "large footprint retail" and instead offer housing and office space, both of which he argued were needs downtown.

"One of the things we see that will help keep the downtown healthy is to have a lot of people downtown," he said.

ARC members reviewed conceptual plans for the project on Dec. 3, a preliminary step before it moves through the city's final approval process. The building includes a brick design from the ground floor to the third and fourth floors, and stucco for the upper floors.

Commissioners described the proposed design as "institutional" and asked the developer for several tweaks, like deeper setbacks from the street, to reduce its mass.

"The overarching comment was that this prominent location deserves a high-quality design," Doug Davidson, deputy director of the SLO Community Development Department, told New Times. "There was overlap with major themes: pedestrian activity and engagement, with wider sidewalks, particularly on the corner."

Notably absent from the ARC discussion was the 75-foot height of the building, according to Davidson. It was front-of-mind for residents in attendance and in the few dozen letters submitted to the city.

"What worries me is that this building, this height will be the tipping point for new projects downtown," resident Dave Hannings said. "Over many years, SLO has a long, fortunate history of buildings that are interesting. Many have been designed by well-known architects ... and we're very fortunate to have those. This isn't one of those. This looks like an FBI building, an IRS building. ... It's an uninteresting big blob parked right downtown."

When Jamestown Premier submits its revised plans to the city, they'll be reviewed by the Cultural Heritage Committee, the ARC, the Planning Commission, and the City Council. Δ