First it was a 47 percent rent increase. Then an eviction notice.

When San Luis Obispo tenant Linda Kelly received these notices back-to-back for her rental of more than 20 years this fall, she knew her landlord was looking for a loophole in a new state law that sets stronger tenant protections throughout California. 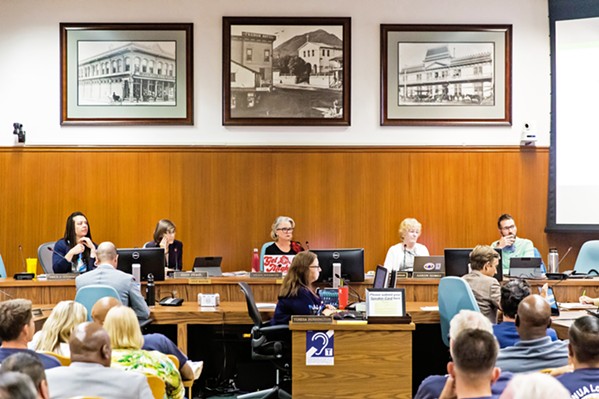 Assembly Bill 1482, signed by Gov. Gavin Newsom in early October, takes effect on Jan. 1, 2020, and bars landlords from increasing rents by more than 10 percent each year and from evicting tenants without "just cause." The loophole? While the bill's rent ceiling protections are retroactive to March 2019, the eviction protections aren't. So, retracting the rent hike, Kelly's landlord hit her with a 60-day eviction notice instead.

"I will be required to vacate the property on Dec. 31, 2019. This will allow the property manager to increase the rent to any desired amount as of the first of the year," Kelly wrote in an email to the city of SLO on Nov. 20. "I don't believe that I am alone in dealing with this type of manipulation of lives in order to insure greater profits."

And she's not, according to tenant advocates. As AB 1482 sits in limbo until Jan. 1, evictions are spiking statewide, which has prompted more than 30 cities to adopt emergency stopgap ordinances that mirror AB 1482.

Since October, 13 tenants in the city of SLO—and 26 throughout the county—have contacted the California Rural Legal Assistance about alleged unjust evictions and/or rent increases, according to a SLO city staff report. And it's not the only nonprofit fielding calls from tenants in trouble.

"In the more than six years since I've been with the organization," said Stephanie Barclay, legal director at the SLO Legal Assistance Foundation, "we've never received as many calls regarding people who are getting their rents raised or getting eviction notices as we have since October, when the tenant protection act was signed into law."

In the wake of these reports coming to light, the Grover Beach and SLO city councils voted on Nov. 18 and 26, respectively, to pass their own emergency ordinances. The ordinances mimic the protections set in AB 1482, and will expire on Jan. 1 when the state law kicks in.

"It's not too late," Barclay told SLO City Council members.

SLO's council voted 4-0, with Carlyn Christianson absent, for the ordinance, expressing regret about not getting to it sooner.

"We have a moral obligation I think to stand with people to keep them sheltered," SLO Mayor Heidi Harmon said at the Nov. 26 meeting, "especially right now in the heart of the holiday season."

Evictions, Barclay said, are by far the most pressing issue with the gap before AB 1482.

"What's happening is landlords who are savvy to what's going on are serving eviction notices now," Barclay said. "Legal aid attorneys like myself are preparing to fight those evictions in court. But there's a lot of uncertainty."

SLO's and Grover Beach's new ordinances could help tenants with those eviction battles, especially evictions that were initiated this year but are still pending, according to advocates.

"It does contain a retroactive provision related to unjust evictions," said Derek Johnson, SLO's city manager. "Someone could've provided a notice months and months and months ago, but if they haven't completed the entire process and an unlawful detainer hasn't been issued, [the ordinance will apply]."

While SLO and Grover Beach have taken action on AB 1482, most other SLO County cities don't appear headed down the same path. In response to questions from New Times, city administrators from Paso Robles, Atascadero, and Pismo Beach said they had no plans to adopt emergency ordinances. Morro Bay, on the other hand, is exploring it, according to City Manager Scott Collins. SLO County and Arroyo Grande did not respond before press time.

Tom Frutchey, Paso Robles' city manager, noted that the city is "actively monitoring, but so far [has] received no complaints, nor do we have any other evidence of problems being created just in advance of the effective date of the state legislation."

Even though dozens of tenants in the 54-unit Grand View Apartments face evictions due to landlord neglect, Frutchey said those aren't relevant to AB 1482.

"[The evictions] were under existing law and have already been approved by the courts," he said.

Meanwhile, tenants who spoke at the Nov. 26 SLO City Council meeting say they're feeling more vulnerable than ever.

"As of the first of December, I will be homeless," said 66-year-old Roberth Toth, a tenant with a disability. "It's wrong. You're not supposed to be able to evict someone on housing for no cause. Our governor took care of that, but it's a little late for us. Homelessness for me could be a death sentence." Δ