by Peter Johnson and Karen Garcia

As communities across the U.S. grapple with China's recent pullout from the recycling market, local cities are raising their curbside waste service rates to adjust.

During the week of June 17, the cities of San Luis Obispo and Grover Beach approved garbage/recycling rate increases of 14 and 10 percent, respectively.

They join Pismo Beach, Atascadero, and, soon, other SLO County cities in raising rates for the waste services provided by private companies. 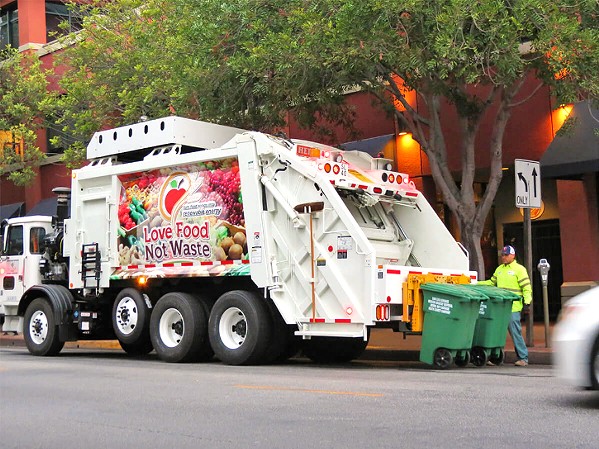 In a June 18 presentation to the SLO City Council, SLO utilities official Mychal Boerman said more than half of the rate increase is to address the growing costs for San Luis Garbage Company to sort unrecyclable items from recycling bins.

"It requires us to slow down our recycling lines, hire more people to sort through that material, and it's just driving our costs up," Boerman said. "That's really the driving force behind this rate increase. ... It's really a nationwide crisis almost."

SLO's new rates, which will show up as a $2 to $6 monthly increase on residential garbage bills, take effect on June 19.

Grover Beach's 10 percent increase will take effect July 1. That increase was proposed by South County Sanitary, a private company that provides solid-waste collection and disposal services, including recycling services, under a franchise agreement with the city.

According to a staff report, the increase is also a consequence of rising costs associated with processing of recycled material, as well as increased vehicle costs, increased labor costs, and costs associated with the implementation of an organics program. That program is mandated by state Assembly Bill 1826, which requires local jurisdictions to develop programs to divert organic waste from landfills to an authorized composting facility.

At a June 17 Grover Beach City Council meeting, Jeff Smith, district manager at South County Sanitary, said that like what SLO is facing, the real problem is what's being tossed in the blue bins. He said the sorting line speed was cut in half due to the amount of items that need to be taken out of the recycling pile.

"We've doubled our labor force just to try to get every piece of trash we can out of it so it's acceptable," Smith said.

Local waste agencies say they're working to inform their customers about what can be recycled, as the items have changed over the last several years.

According to South County Sanitary, which services the Five Cities area, acceptable blue bin items are anything with a recycling code on it; aluminum and steel cans; bottles, plastics, and cardboard; and aluminum foil. The company's website has a tool called "what goes where" that allows a customer to type in an item such as "tuna can" and the tool will tell the customer whether it goes in the recycling bin or trash bin (in this case, the recycling bin).

Elected leaders noted that more public outreach will be necessary to achieve reductions in recycling contamination levels. The Integrated Waste Management Authority is gearing up for a public information campaign on the issue, according to SLO City Councilmember Aaron Gomez.

"We need to do that outreach, and we are," Gomez said.

Meanwhile, the complex, evolving dynamics of recycling are making it difficult for communities across the county.

"I hear people tell me all the time, 'I don't know anymore, I hear too may things. I just throw it away,'" SLO City Councilmember Erica Stewart said.

"Even those of us who feel like we're pretty knowledgeable about the topic feel pretty lost about what is recycling," added Mayor Heidi Harmon. Δ