In high school, I didn’t do space camp; I didn’t do school band; and I definitely didn’t do drama club. I thought I was too cool to do anything that wasn’t screaming into a microphone while playing Call of Duty with my Cheetos-dusted fingers.

As an adult who’s about to graduate with a bachelor’s degree from Cal Poly, I wish I had taken advantage of the countless opportunities available to high school students, like the Central Coast Youth Hackathon. 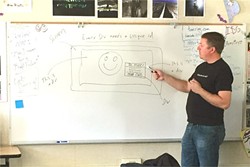 The day started with the ever-so-uncomfortable icebreakers. The first game involved getting with a partner that you’ve never met and answering a question: “If you could go anywhere in the world tomorrow, where would you go?” Or, “If you had one million dollars, what would you do with it?”

I watched one student go through the kind of experience that might haunt him well into his 20s. It was when the music cuing students that it was time to stop moving around came to a screeching halt and the student noticed everyone around him was partnered up. That is, except one girl who was in the same position he was in. He bravely said, “I’m not sure that I’ve ever met you before … .” She walked away. It’s instances like these that would have made high school me crawl up into a little ball and go listen to Taking Back Sunday on repeat. But unlike me, this student didn’t go hide in a corner; he went and found another partner almost instantly.

I’m sure that some of you reading this are like, “Yeah, what the heck is a hackathon?” It’s an event where individuals get together in teams to pitch and then create a product. Sometimes, a company will put on an event where they give teams software and challenge them to do new and interesting things with it. Other times, it’s an event where individuals pitch an idea for an app that they create from scratch, or it can be as abstract as the Shit No One Needs & Terrible Ideas 2.0 event that takes place in San Francisco on May 14 and boasts a banana zipper as its promotional picture.

The youth hackathon isn’t about making a product as much as it’s about getting experience that isn’t a part of the everyday high school curriculum.

Some students broke off into groups that dealt with learning web development in JavaScript and HTML, and others learned basic app-creating skills. Either way, the learning curve was extremely steep and the information came at breakneck speed. I’ve learned basic coding in my journalism classes, and these students, who ranged from squeaky-voiced 13-year-olds to kids who can legally vote, were learning concepts that were more advanced than some of what I’ve learned at Cal Poly.

Cal Poly’s hosting the TransUnion Interactive Consumer Hackathon on May 6 and 7.