It's right at noon when the bell rings and San Luis Obispo High School's campus suddenly comes alive. Students flood out from classrooms, funnel through hallways, and empty out into a grassy courtyard, where music and the meaty smell of burgers on a grill mingle in the air.

Some kids dart to the parking lot—they'll be taking their lunch breaks anywhere but here—but those sticking around seem happy to gather with friends and sprawl out on the lawn. Some get to work unfolding packed lunches, others have cafeteria food, and a lucky few—this month's chosen ones—are forming a line behind the grill, paper plates and coupons proving their Student of the Month status in hand. 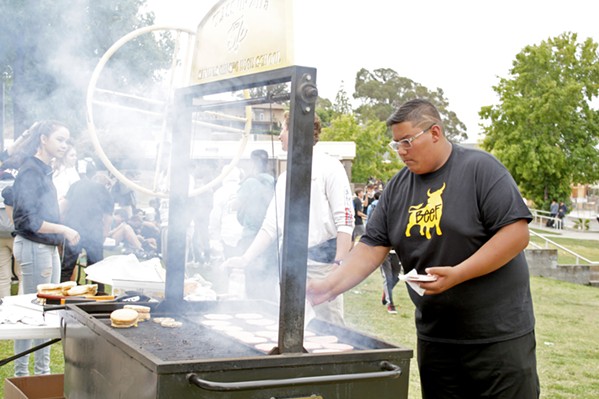 It's Sept. 27 and time for this year's first Student of the Month Barbecue, an event hosted by the Associated Student Body (ASB) during lunch once a month to celebrate kids who warrant celebrating.

The barbecue is just one of many lunchtime activities ASB provides, all of which are part of a mission to create a culture of inclusivity and fun on campus during lunch, according to ASB Director Jim Johnson.

"We can't help it if you have calc homework," Johnson says, keeping a watchful eye on the grill and ASB students who've taken over the cooking for him, "but we can have fun during breaks and lunch."

SLO High has an open campus lunch policy, meaning sophomores, juniors, and seniors can leave the premises for about a half hour each day to get food. That's fine, Johnson says, but faculty don't want kids to want to leave.

"We want kids connecting with something," he says.

The Student of the Month Barbecue is fun, Johnson says, because it allows for positive reinforcement. Teachers each get two coupons a month, which can be awarded to any student for pretty much anything, from good behavior in class to doing a kind deed. Kids who receive coupons can then redeem them for free food at the barbecue.

But ASB hosts other lunchtime events, too. Sometimes they sell food or set up games—giant ring toss is a crowd favorite—or put on intramural games. Dodgeball season just ended, Johnson says, and that's popular among both teachers and students, who Johnson says seem to really like to hit each other with balls.

"It's a great way to highlight our artists," he says, "and entertain kids."

ASB is helping to create a positive and supportive culture at lunch for all types of students, according to SLO High Principal Leslie O'Connor, who said he wants campus to be a place where kids feel welcomed and safe. But there's an ulterior motive, too.

SLO High is about 60 percent of the way through construction funded by Measure D, a bond passed by voters in 2014. Soon the school will have a full cafeteria and food court, which will be able to hold and feed every student enrolled at the school. When that's officially possible, O'Connor said administrators hope to end open campus lunches.

That won't be for another three years or so, O'Connor said, but if staying on campus is already fun, the transition to closed campus lunches won't be as difficult for students.

At this Student of the Month Barbecue, the school's tactics seem to be working.

ASB Director Johnson is back in the thick of his current position as grill master, one of his many jobs here at SLO High. He throws some pink patties on the grill and is suddenly engulfed by billowing smoke. He wipes his forehead with a towel hanging around his shoulders and asks students in line whether they want cheese on their burgers. His line of view isn't exactly clear—his eyes are covered by smoke-fogged glasses—so he points at each student with his spatula and awaits a response.

Kids laugh as they shout out their orders. It's San Luis Obispo's first overcast day in months, but it feels sunny here at SLO High.