The city of San Luis Obispo is turning to outside help in its ongoing investigation of a building inspector who sparked recent public outrage for his 2016 assault of a couple in an Avila Beach bar.

In February, Chris Olcott, 39, pleaded guilty to a misdemeanor battery charge in the incident, which was caught on surveillance video and published online in April. 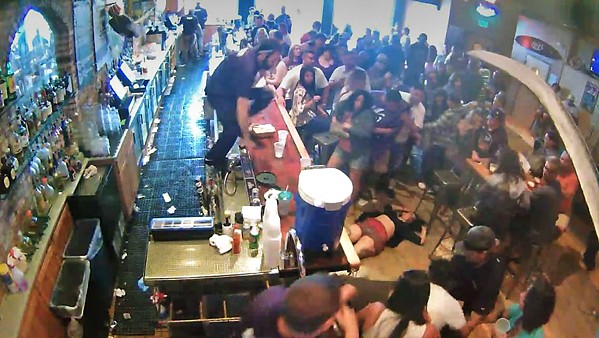 The video—which shows Olcott knocking a female victim unconscious with his elbow and then repeatedly punching her male friend—ignited widespread anger and prompted the city to place him on paid leave the week of April 15.

"The city will thoroughly and quickly investigate the record to determine appropriate employment actions," City Manager Derek Johnson said in a statement sent to local media outlets on April 16.

"It is common for us to retain an outside investigator where there is an extensive record, such as the criminal record at issue here, where there are multiple witnesses and interviews to coordinate," SLO City Attorney Christine Dietrick told New Times via email. "We are seeking to ensure objectivity and separation between the investigative and staff advisory roles."

Olcott earns $2,840 in compensation bi-weekly. As his paid leave enters its ninth week, he's collected more than $11,000 between April and June.

SLO's prolonged review has caused some frustration among residents who believe the bar video is adequate evidence for termination. In response to one such public comment at a May 21 SLO City Council meeting, Dietrick offered an explanation for the review's comprehensiveness.

"While I know it can be incredibly frustrating and incredibly opaque, there are privacy laws surrounding investigations of personnel matters," Dietrick said on May 21. "There are procedural requirements that we are required to respect in order to protect the integrity of the investigation and any subsequent action."

Part of the investigation includes obtaining Olcott's entire trial record from 2018. Olcott initially faced felony battery charges for the assault, but a jury declined to convict him. In February 2019, Olcott entered a plea deal with the District Attorney's Office for a misdemeanor and was sentenced to 60 days in jail and probation conditions.

Olcott hopes to serve his time outside the county. In the wake of his plea, he filed a request in court for a transfer to a "pay-to-stay" jail in Southern California—which is now up to the SLO County Sheriff's Office to approve. Pay-to-stay jails are known for having upgraded incarceration conditions, with amenities like TVs and computer rooms.

Sheriff's Office spokesman Tony Cipolla told New Times that the office has not received a proposed location for Olcott's stay. But he said Sheriff Ian Parkinson would not object to the request as long as the proposed jail was court-approved and in a public facility—and if Olcott paid the cost.

Ilan Funke-Bilu, Olcott's attorney, wrote in an April 23 letter to SLO city that Olcott has been the subject of "a public lynching," and has received "expressed death threats" in the wake of the video's release.

"My client has been threatened with beatings in and out of custody," Funke-Bilu wrote. "Gang members have apparently been conscripted to protect the honor of innocent women."

"My client is a good man and an excellent city employee," he wrote. "Our system of justice has spoken and should be respected." Δ