San Luis Obispo City Manager Derek Johnson considers himself "an action person." So last summer, as Black Lives Matter protests erupted in the city, criticism mounted against the SLO Police Department's response, and former Police Chief Deanna Cantrell left the city in September, Johnson said he got to work thinking about the future and police reform. 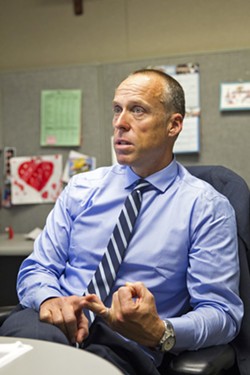 "There are legitimate conversations about the role of police and how we should be best policing in the community—we have to have those conversations," Johnson told New Times on March 11. "I'm hoping we can move that along. I'm an action person. I understand the passion and the emotion, and I'm ready to get to that part of the conversation."

On March 10, after a six-month search, SLO announced that it'd found its next police chief to help lead those discussions. The city is hiring Rick Scott, the assistant police chief of North Richland Hills, Texas, a suburb of Fort Worth with a population of 70,000 residents.

A 24-year veteran of the department who's currently in charge of police operations, Scott rose to the top of SLO's hiring process, which involved citywide surveys, focus groups, and a community panel that participated in interviews. Johnson said Scott emerged as the top choice due to his "collaborative" nature and "holistic and balanced perspective to policing."

"It's never unanimous, but there was some real clarity about the top candidate," Johnson said. "What he demonstrated is he has some fresh ideas and perspectives. He's got the energy. He understands first and foremost that building trust and relationships is the foundation."

The out-of-state hire forced community members in the process to put aside any biases and stereotypes about Texas, Johnson said. North Richland Hills has a similar demographic profile to SLO (a largely white city) and Scott is a white man, but Johnson said community members looked to his character and credentials even while prioritizing diversity, equity, and inclusion.

"Just like California is not homogenous, neither is Texas," Johnson said. "When we looked at the individual, we said, 'Wow, he I think defies a lot of what may be common stereotypes about Texas, and he as a Texan in his understanding of California defied what we think that Texans think of us.' So he demonstrated that through the process, and ultimately it was a judgment of his character, his values, and his experience."

Scott declined a New Times interview request due to travel, but said in an email he's "received a very warm reception thus far and look[s] forward to getting to work in support of this great community and department."

Two community leaders who spoke to New Times offered their support for the hire. Doug Heumann, a local LGBTQ-plus advocate and member of the SLO Police and Community Together (PACT) team, said that "after meeting Rick and reviewing his qualifications, I believe that he is an excellent choice."

Stephen Vines, president of the SLO County NAACP, said that while the city and its consultants recruited the candidates and "pretty much managed the whole process," Scott "seems to be a progressive" and that Johnson "did a good job."

Pending medical and psychological evaluations, Scott is expected to take over the department in May, while SLO's interim chief, Jeff Smith, will depart to become the next police chief of Pismo Beach. 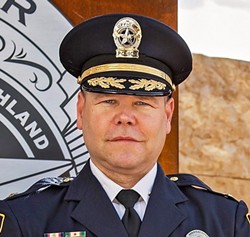 Scott will arrive as the department faces scrutiny locally and beyond for a tumultuous few years, highlighted by the use of tear gas at a protest last summer and the controversial 2020 arrest of Black Lives Matter activist Tianna Arata. SLO Police are also confronting a growing homelessness crisis in the city—a challenge that Johnson said law enforcement has been unfairly leaned on to respond to.

"Should police officers be the ones who are doing all the social work and field work on homelessness? Absolutely not," Johnson said. "But we have a failed state and county system where there is no alternative—so what do people do? They call police. Now police are doing everything from homelessness, to domestic disputes, to child welfare, and everything else. I think there is a legitimate conversation: How do we get police out of those situations?"

That's one area that Johnson hopes to make reforms. Johnson asked Scott directly about the "defund the police" movement that calls on cities to redistribute resources away from traditional law enforcement activities toward other means to solve systemic problems and inequities.

In upcoming budget talks at the City Council, Johnson said he'll be proposing a pilot program modeled after programs in Eugene, Oregon, and Denver, Colorado, where paramedics and social workers respond to calls on homelessness rather than armed police officers. The program has been successful in reducing arrests and delivering other services, and Johnson said it's the type of structural change he's interested in. He added that he wants to grow marginalized community members' representation on the PACT team, and he will ask Scott to spearhead a new strategic plan for the police department.

"Is it going to make everyone happy? No, but it's a step in the right direction," he said. "Ultimately, I believe that marginal gains and adjustments that can be sustained by investments and can be absorbed by the system are going to have a more cumulative effect than a radical shift. ... I think doing it right is more important than doing it quick." Δ