On the longest night of the year—one that would reach a low of 29 degrees in San Luis Obispo—and the eve of the first day of winter, residents joined their elected officials and clergy to pay tribute to the local homeless population, many of whom would spend the night in the cold without shelter. 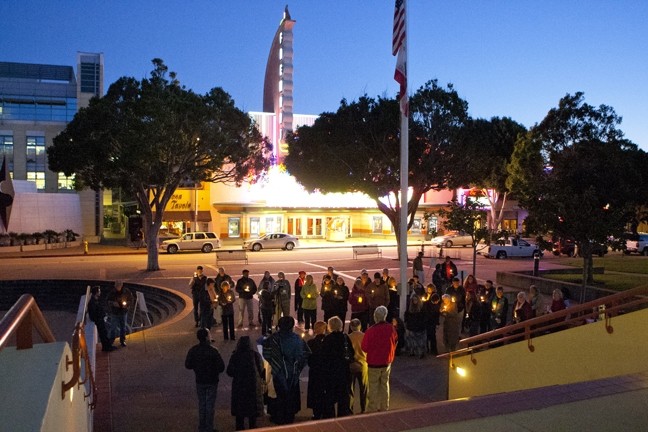 About 50 people gathered at the steps of the SLO County Superior Courthouse on a very brisk Dec. 20 evening to honor National Homeless Persons’ Memorial Day by lighting candles and singing along to guitarist Nick Brittan. The event was to raise awareness of people who have lost their lives without homes.

District Five county supervisor Jim Patterson—chair of the Homeless Services Oversight Council of SLO County—kicked off the event, revealing that five people perished in the cold locally in 2011.

“In the midst of a national tragedy, we want to recognize a quiet tragedy that happens every day,” Patterson said.

Jay Warren, who has endured several bouts with homelessness, told the group that he has friends who haven’t survived constant exposure to the elements. But services such as those provided by the Maxine Lewis Memorial Shelter have made the difference to people in the community like him, he said, without homes during the coldest time of year.

“When I needed it, they were there,” he said of homeless services staffers. “I’m eating every day—it may be a lot of pasta, but it’s still good.”

Mayor Jan Marx closed the event, claiming that nearly half of the county’s homeless population—some 2,000 people—live in the city of SLO.

“We need to remember this holiday season that many of us are in creeks, tents, shelters, and perhaps sleeping on a friend’s couch or sleeping in a car,” she said.

Marx capped her speech off by asking the public to donate funds to established organizations that work with the homeless—such as the Community Action Partnership of SLO County—and not to the homeless themselves.

“It’s really important to be careful about how we donate our money or our services. Often there is substance abuse involved,” Marx said. “But if you give money to the organizations, you know you’re not contributing to their destruction.”

The city council is sponsoring a public workshop to discuss local homeless issues on Jan. 12 at the SLO City/County Library in San Luis Obispo.