After graduating Cal Poly with an entrepreneurship degree, Robert Zachs did not immediately create “the next big thing” in tech. He did not instantly grace a Forbes Magazine “30 under 30” list. He did not buy a fancy car and become an eccentric rich guy. But he kept his eyes open, and he traveled the world.

In Europe, Zachs got his hands dirty working at organic farms through the WWOOF program, which allows travelers to learn hands-on agricultural skills in exchange for room and board. Between harvesting, planting, and composting, something miraculous happened.

Zachs was wandering the cobblestone streets of Paris when his life flashed before him. His future would be green, leafy, and alive.

“I came across a living wall in the city and was amazed how it transformed a concrete wall into a living piece of art,” Zachs said.

Living walls are exactly what you’d imagine: a façade of greenery; a divider that does not “divide” so much as it connects us back to the Earth. Zachs was inspired by this collision of worlds, both modern and natural. So, when he returned from Europe, he spent two years inventing and testing vertical garden systems in his parents’ backyard before launching his first company, Z Living Systems Living Walls + Design.

But how exactly would the Cal Poly grad bring this idea to fruition in an ever-changing, fast-paced world where the old rules of business simply don’t apply?

Zachs had a useful entrepreneurship degree, true. But he would need some real-life, tangible support, including office space—a physical realm to flesh out his ideas. This is where the San Luis Obispo HotHouse comes into the story. Powered by the community and Cal Poly, the resource works to support SLO’s startup culture by offering an affordable space to work, professional guidance, and a network of business support. The HotHouse was there to serve this very need, and not a moment too soon.

As a Cal Poly grad, Zachs was eligible to apply for the HotHouse’s 2013 Accelerator program, which aims to attract talented Cal Poly start-ups and keep them in SLO County. Long story short: He won the coveted slot. Through the program, the fledgling company received $10,000 in seed funding, business launch support, professional training sessions, mentorship, legal assistance, an advisory board, and a physical office space with all the amenities needed to turn dreams into reality.

“The HotHouse helped us craft a circle of successful business owners and consultants who have continually advised and guided us on the core areas of our business, which include horticulture, construction, and business development,” McDermott said. “Without hesitation, the most valuable resources have been the mentors and the leaders within the community that the HotHouse has connected us with. They have been an integral part of our success.”

The team created a living wall for SLO’s MindBody headquarters—the same wall that inspired this New Times reporter to tackle this story. According to Zachs and McDermott, the block of green foliage on display at the local tech facility is an incredible example of what the public can expect to see from the company moving forward.

“We have had a few people who have believed in us and gone out of their way to give us an opportunity to showcase our work on a large scale; Rick Stollmeyer [MindBody CEO] is a shining example of that,” McDermott said. “From our first couple of projects, we have gained the experience and reputation that has continued to garner a lot of interest from other clients allowing our business to grow organically.”

That business recently completed a 1,200-square-foot living wall for The Resort in Playa Vista California. Although the HotHouse has pushed this SLO-born start-up out of the nest, HotHouse mentors have faith that the duo will continue to rise to the occasion. Most entrepreneurship grads have a certain DIY mentality—a certain gumption to get up and go, and the grads behind Z Living Systems are no different.

Zachs has been entrepreneurial since his days selling candy out of a briefcase in elementary school. He developed a passion for sustainability through the Sustainable Environments minor at Cal Poly, and—as you now know—the rest is history.

McDermott grew up with a mom who was a business owner and a dad who encouraged his six kids to go into business for themselves. Before Z Living Systems, McDermott worked at a local nonprofit followed by a start-up focused on strengthening local food systems.

These are exactly the kinds of driven, self-starting graduates that Tod Nelson looks to empower and inspire. As executive director of SLO HotHouse and the CIE (Center of Innovation and Entrepreneurship), Nelson is invested in bolstering SLO’s start-up ecosystem and keeping it vibrant. The CIE, which combines off-campus and on-campus resources for Cal Poly students, is ground zero for real-life business knowledge.

Students learn how to make an elevator pitch (what you would say to an investor if you only had a few floors on an elevator with him or her) and on-campus idea incubators help students develop the skills they need to realize even the most ambitious goals.

According to Nelson, the accelerator program that Zachs and McDermott utilized in 2013—which included three months of intensive start-up boot camp—is truly coveted. About 50 companies apply, but just a few get in. And once you’re in, the work has just begun. 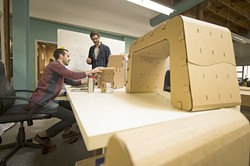 “During that time, these applicants are at a very steep learning curve; people have said that those three months are like getting your MBA because you have to learn so many things,” Nelson said. “There’s finance, marketing, sales, pitching your product, technology, writing code. When you work for a start-up, you have to wear all the hats.”

With SLO’s tech boom on the rise (Shopatron, MindBody, iFixit, and others are well established or growing) it’s easy to see why the HotHouse program makes sense at Cal Poly in 2015. Five years ago, it was a totally different story.

“These programs didn’t exist then; this really is a revolutionary way of thinking about business,” Nelson said. “The old way was about going out and writing a business plan and creating a product in the dark. Then, you’d invest in it and take it to market.”

According to Nelson, 80 percent of the time, that product failed. For one, it was untested. There was no way to know if there was a market for what you were selling or whether people really needed your services.

“Today, it’s about failing before you get started. You go out, create your idea, and search for a business model. You talk to real people to find out what makes them happy and sad. You create a product that fixes those problems,” Nelson said. “When you do that, you can create a product that lights people up. Then, customers will say, ‘Let me buy this from you. I’ll buy your prototype.’”

The ability to be nimble is everything in this ultra-modern world, where technology changes quickly and innovation is king.

“You have to move quickly to find your market,” Nelson said. “You can’t really wait around for a five-year business plan to come to fruition. You have to get out there and find out whether or not your idea fits into the world.”

Hayley Thomas is getting her elevator pitch ready at hthomas@newtimesslo.com.