The SLO Jewish Film Festival runs from Jan. 4 to 7,
with screenings at the Palm Theatre and a reception ,
at SLO Provisions Jan. 6 at 5 p.m. Partial and full ,
passes range from $15 to $200.

There's 183 miles between here and Los Angeles, but the Central Coast has some of its own red carpet flair. For the eighth year in a row, SLO's Palm Theatre will be hosting the Jewish Film Festival from Jan. 4 to 7, bringing together the different works of talented filmmakers in a celebration of film and Jewish culture.

"The festival is a really engaging and intimate experience for our filmmakers and community; it keeps SLO that much more connected to our Southern California neighbors," said Lauren Bandari, festival co-director and executive director of SLO's Jewish Cultural Center Federation. Featuring films both new and old from directors born across the globe, the choice in showings ranges from family-friendly to somber and introspective. This year's festival theme is Women in Film. Co-producers Susan Arnold and Donna Roth (13 Going on 30, The Haunting) have been selected as the festival's Lifetime Achievement Award honorees. 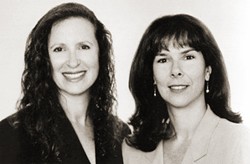 Bandari said the theme was selected before the current wave of women speaking out against sexism and harassment in Hollywood. But even as a timely coincidence, the festival is happy to always support women in film.

"As a female filmmaker, I understand firsthand how difficult it is to make an impact when your voice is suppressed by a boys club industry," said Muara Johnston, the festival's co-director. "There have been extraordinary women filmmakers over the years, but their stories are mostly unknown."

The theme of unknown stories reaches many parts of the festival. While women are gaining more time in the spotlight—with a lineup including Barbra Streisand, Diane Keaton, and more—other untold stories are also getting a chance to shine. Among these hidden treasures is Adam Gross' documentary Searching for Sugihara. The film tells the story of Sugihara Chine, a Japanese diplomat stationed in Lithuania, who helped save the lives of more than 6,000 Jews during WWII by obtaining Japanese visas and smuggling refugees through Russia.

Gross first learned of Sugihara while working abroad as an English teacher in Gifu, Japan. A small book in his classroom briefly mentioned the diplomat among other Gifu natives. Neither Gross nor his congregation had even heard of Sugihara before, so the Chapman University student began to dive into research. He decided to help spread the story of Sugihara's selfless bravery through film.

"A lot of his actions get lost in the overall scope of the war," Gross explained. "There's a lot to be said for a Japanese man saving Europeans he didn't even know. He broke rank for humanitarian reasons."

Between supporting women and giving voice to the voiceless, the Jewish Film Festival offers many films that celebrate the best in humanity. This year's events begin with a special pre-festival screening of Bombshell: The Hedy Lamaar Story on Thursday, Jan. 4. Saturday follows with the Lifetime Achievement Award ceremony and the autobiographical Unstrung Heroes. Sunday's showings range from After Auschwitz, a documentary following the lives of six women after they were freed from the infamous death camp, to the classic baseball flick, A League of Their Own. Ten total films will be presented throughout the weekend, with two additional movies on Jan. 15 in collaboration with local Martin Luther King Day festivities.

"We're thrilled to have this timely theme and celebrate women in Hollywood in a positive and productive light," Bandari said. "We hope to show different cultural perspectives and narratives, to celebrate Jewish culture and life from throughout the world." Δ