For decades, San Luis Obispo has been a small haven for cinephiles throughout the Central Coast. Since 1973, we’ve had the magnificent Palm Theatre. For 21 years, the San Luis Obispo International Film Festival has brought us a star-studded cinematic lineup. And since 2010, the JCC-Federation (Jewish Community Center) has presented the San Luis Obispo Jewsh Film Festival—a unique opportunity to witness films, both features and shorts, which offer a global and diverse look at the lives and stories of Jewish people. For its fifth year, the festival continues with a range of eclectic films that do justice to this year’s theme—“tolerance and acceptance.” From the harrowing story of Jewish-American pilots in 1948 to the world of competitive Israeli football, this year’s crop explores not only what it means to be Jewish in this world, but to be human.

To kick things off, the Jewish Film Festival will be presenting its Lifetime Achievement Award to this year’s guest of honor, David E. Stone. Look him up on IMDB, and you’ll find more than 100 films and shows in just about every genre imaginable: Indiana Jones and the Last Crusade, Beetlejuice, Futurama, Reservoir Dogs, and my personal favorite, the animated musical extravaganza Cats Don’t Dance. For more than 30 years, Stone has worked as a sound editor and sound effects specialist with some of Hollywood’s biggest directors, and this year, he’ll be stopping by for a Q-and-A as well as a screening of the City Slickers II: The Legend of Curly’s Gold.

In case you missed the first one or need a quick refresher (it has, after all, been 20 years since the film came out), City Slickers II stars Billy Crystal as Mitch Robbins—a former New Yorker and nature neophyte who must return to the wild West after he finds an antique treasure map in the band of cowboy Curly’s (Jack Palance) old hat. With his friend Phil (Daniel Stern) and older brother Glenn (Jon Lovitz), Mitch embarks on this adventurous gold hunt with, of course, some expected bumps, cattle stampedes, and villainous shenanigans along the way. Stone served as the supervising sound editor of City Slickers II, so perhaps there are some golden anecdotes in them thar hills. 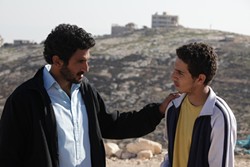 About a million miles away from City Slickers II in both tone and location is Bethlehem—a 2013 drama centered on the relationship between the Israeli police and Palestinian informants. It follows Sanfur, a teenager who lives in the film’s titular city alongside his older, more militant brother, Ibrahim, who has gone into hiding after becoming involved in an extremist organization. It’s soon revealed that Sanfur is working with Israeli agent Razi as an informant regarding his brother’s activities. Together, the two must negotiate the murky lines between familial, national, and cultural loyalty. Before breaking into film, director and writer Yuval Adler worked for Israeli intelligence services and spent three years writing and researching the movie with Muslim journalist Ali Waked. As a result, Bethlehem offers an acutely balanced and intimate portrait of a region torn between warring forces. Bethlehem was Israel’s entry for the Best Foreign Language Film category at the 2013 Academy Awards.

Like Bethlehem, the short film Machsom concentrates on the tense ties between Israel and Palestine. In Hebrew, “machsom” means checkpoint and it is at one of the checkpoints along the West Bank where 19-year-old Yaniv Greenblatt works. He is a soldier, ordered to protect the Israeli border, but he struggles between the hostility his occupation demands and his pacifist disposition. At home, Yaniv must also face his conservative mother, whose husband died in a terrorist attack, and his younger brother, Avi, who goes to a more progressive and mixed Jewish-Arab school. Producer Bayard Outerbridge will be at the screening for a follow-up Q&A session.

When most people think of America, there are a few typical associations—fast food, eating fast food while watching television, and football. In fact, to everyone else in the world, it might as well be known as American football due to its alarming lack of resemblance to the more accurately named other football. But I digress. America is not the only country invested in tackle football anymore, my friends. Ten years ago, a group of Israelis (some American transplants, some native Israelis) founded the Israel Football League—a fully equipped, professional league sponsored by New England Patriots owner Robert Kraft. The documentary, Touchdown Israel, tells this light-hearted story about the founding and operation of this atypical group. With interviews and footage of the games, it almost plays out like a classic sports movie. It’s an offbeat, often funny, and unconventional look at a group of underdogs who come together for the love of the sport. Not to mention, it offers an intriguing look at the mix between American and Israeli culture.

It’s May 1948. Israel is only days away from announcing itself as a state, but first it must overcome the threat of invasion … with no organized military force. A group of World War II pilots volunteer to help. Above and Beyond tells their story. In interviews and archival footage, we learn about this unconventional bunch of Jewish-American pilots. Under the duress of time and secrecy, they managed to supply Israel with equipment at a critical juncture. The odds were stacked against them. Their planes were beat up, their supply (of fuel) was flammable, and they were traveling more than 1,000 miles over nothing but sea. Eleven hours later, they touched ground in Israel and, at the same time, set the foundation for the first Israeli Air Force. It’s a thrilling tale, told with a propulsive score, about a subject often forgotten by the annals of history and popular culture. Filmmaker Roberta Grossman will be in attendance for a Q&A session at the screening.

“No other Jewish dish has been the subject of so much scorn, mockery, and praise as much as gefilte fish.” This is the quote that begins Shayna Cohen’s short-but-sweet film of the same name. It’s a simple story about Manya, an elderly Russian Jewish widow who is on the verge of being placed in a home. To prove her self-sufficiency to her family, she decides to make her signature gefilte fish. With the help of Terrence, a young African-American man sent from the elderly home to aid her in the transition. Together, they develop a kindred bond over that contentious fish dish. Filmmaker Shayna Cohen will be at the screening of Gefilte Fish for a Q&A session. 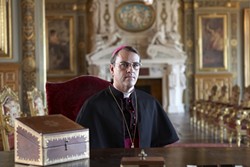 Jewish Cardinal seems like a contradiction in terms, but it was a way of life for Jean-Marie Lustiger. In 1926, Lustiger was born in Paris to a Jewish family who had emigrated from Poland sometime around World War I. Around the age of 13, he discovered a Protestant Bible and became instantly engrossed in it. He soon converted to Catholicism and quickly rose through the ranks, eventually becoming Archbishop of Paris under Pope John Paul II. His entire life is a fascinating character study, but Jewish Cardinal focuses on the middle years of his career when he arose to prominence during negotiations with a group of Carmelite nuns who decided to build a convent within the former Auschwitz concentration camp. It’s an elegant, layered portrait of not only Lustiger, but of two communities (Catholics and Jews) that find common ground in their shared, sometimes tragic history.

Cal Poly art and design professor Sky Bergman spoke to more than 30 people for her upcoming documentary, Lives Well Lived. Some of these people are local luminaries, like Wachtang “Botso” Korisheli, the accomplished music teacher from Morro Bay, and Linnaea Phillips, the founder of SLO’s Linnaea’s Café. Some of these people are painters, photographers, authors, and civil rights activists. Some are nearing their centennial; some still have a ways to go. But what all these people have in common is a rich life filled with stories to tell. Bergman’s been capturing these stories, of regret, love, family, loss, and happiness, for some time now, and the documentary is expected to premiere sometime this spring. The Jewish Film Festival will be screening a 12-minute trailer for Lives Well Lived in addition to a discussion with Bergman and some of the film’s subjects.

The Jewish Film Festival will take place the weekend of Jan. 10-11. All films will be shown at the Palm Theatre in downtown San Luis Obispo. Ticket prices for screenings are $12 in advance. There are additional ticket options for the whole weekend and for the individual receptions. For more information, visit jccslo.com/slojff. Below is a schedule of film screenings for the festival:

Above and Beyond, Q&A with filmmaker Roberta Grossman

Jessica Peña is busy kibitzing about cinema, but you can reach her at jpena@newtimesslo.com.