Absent more state and federal help, San Luis Obispo leaders say the city can only realistically get about 70 percent of the way to its ambitious target for carbon neutrality by 2035.

And even that 70 percent will require full-bore community effort and buy-in, city leaders said at a Dec. 3 City Council meeting. 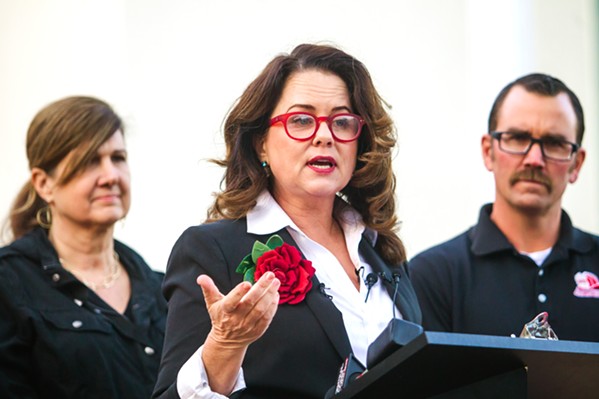 Discussed at length during the City Council study session, the six-pillared plan outlines a litany of measures that together could cut citywide emissions by more than 230,000 metric tons of carbon dioxide per year.

"This gap represents emissions that could be addressed by the federal and state governments, regional agencies, and local partners," the meeting's staff report read. "The gap also represents the uncertainty in taking a leadership role in addressing a challenge that hasn't been solved before. The city will need to embrace that uncertainty."

SLO has one of the most aggressive net-zero timelines in the entire U.S. It's 10 years faster than former Gov. Jerry Brown's highly ambitious target of 2045 for California and 15 years faster than what other progressive cities, like San Francisco and Santa Monica, pledged.

Yet the SLO City Council is OK with shooting for the moon.

"People won't do small things for small goals, but they will do big things for big goals," Mayor Heidi Harmon said.

Councilmember Carlyn Christianson added that the target can serve to propel SLO to the front of the pack as global climate leaders, which will serve it well when the rest of the world starts to reckon with the urgency of climate change.

"I do believe at some point in my lifetime the world and the feds, especially, are going to figure out that we have to take drastic action," Christianson said. "And when [they] do, not only will the city have been on the forefront, but our community will be much more prepared. It'll be easier then."

Transportation is SLO's worst emissions sector, and so it's fittingly also the sector where the city envisions the most CO2 reductions.

"[Vehicle emissions] are a critical component; they're also really hard to reduce," said Chris Read, the city's sustainability manager. "We see in California statewide, every emissions sector is going down except transportation."

Some residents have asked the city to also consider the impact its tourism economy has on carbon emissions. Former SLO Mayor Peg Pinard wrote a critical letter to the City Council on Dec. 2 prior to its meeting that called tourism "the elephant in the room."

"The city's advertising for tourism encourages people to come from far away—and they do," Pinard wrote to the council. "That very important information is totally missing in your staff report. It appears that the city is placing the entire impact of carbon from transportation sources on the local residents."

In addition to the realm of transportation, SLO also wants to chip away at emissions through its partnership with Monterey Bay Community Power, which will procure carbon-free electricity for the city starting in 2020. Going hand in hand with that transition is the city's plan to adopt an all-electric building code. Reducing emissions in existing buildings is also a goal—with a target of cutting them by 50 percent through a variety of retrofit and solar panel programs.

Another pillar of the net-zero plan is diverting organic waste from landfills to composting facilities, like the new regional anaerobic digester. The plan sets a 75 percent diversion target by 2025, and a 90 percent target by 2035. Within the next two years, SLO will start requiring that residential and commercial waste customers have organic waste subscriptions.

Carbon sequestration also plays an important role in the plan. Included in its "natural solutions" pillar is a goal to plant 10,000 new trees by 2035, to write the city's first Urban Forest Master Plan, and to conduct a "carbon farming study" at Johnson Ranch Open Space.

"About 1/4-inch to 1/2-inch [of compost] applied has been proven to sequester a lot of carbon, and hold that carbon in the ground," explained Bob Hill, the interim deputy director of the city Office of Sustainability.

A Cal Poly botany professor, Jenn Yost, spoke at the meeting in support of the tree-planting initiative. She said one of her recent Cal Poly classes measured SLO's canopy cover—and the results surprised her.

"That analysis ... showed that we only have 13 percent canopy cover," Yost said. "There's much more concrete and built space and asphalt in our city than there is green plant space."

City staff said it plans to release the finished net-zero plan for public review and final approval in early 2020.

Council members, looking to the future, emphasized on Dec. 3 that the success of their ambitious climate goals hinge on residents' support, buy-in, and active participation.

"I do believe that this community is in general supportive of climate action," Christianson said, "but most of them that I talk to kind of expect somebody else to do it. I think the key lesson that we are learning is that we have to not only do things on our own individually, but also support the changes in processes and systems that are going to really make the big differences. And those are often met with a lot of resistance from individuals, which is understandable but is really going to have to be dealt with." Δ