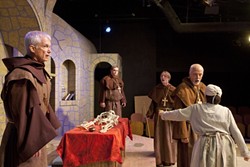 Its themes may be dark, but Michael Hollinger’s Incorruptible makes for a downright giddy season opener at the San Luis Obispo Little Theatre. An able cast, under the direction of Jill Turnbow, is clearly up for fun in this goofy, adorable little farce about French monks trafficking in human body parts.

The year is 1250 A.D. A monastery in Priseaux, France has been charging its miserable, dirty patrons a penny to pray to the relics of Ste. Foy. Trouble is, Ste. Foy hasn’t worked a miracle in 13 years. The villagers have taken to other techniques of curing their oozing lumps and mangy cows. For example, throwing dung over one’s left shoulder after turning around three times. This hasn’t produced any miracles, either. Thinks are looking pretty bleak, but the monks place their hopes on a visit from His Holiness. That’s the Pope.

The play opens with weary, imposing monk Martin (played by Tom Ammon) attempting to remove a poor, nameless peasant woman (Rosh Wright at her conniving, loopy best) from the monastery, before the woman manages to sneak in a prayer to the saint without paying.

“Haven’t you better things to do than harass old women?” Wright snaps, playing up her pitifulness—yet briefly allowing us to catch a greedy gleam in her eye.

No sooner is Peasant Woman No. 1 shuffled out the door than another monk (the dim-witted Brother Olf, played by Matthew Hansen) shuffles in, carrying a lumpy and medieval-looking sack, which turns out to contain …

For Charles, the abbot (an authoritative yet high-strung John Geever), this is really too much.

“Wonderful!” he shouts. “Perfect! I can see it now. His Holiness arriving as we drop a Jew into consecrated ground … ”

But the Pope won’t be coming after all. He’s in some stupid second-rate convent in Bernay, of all places. We learn this from a flushed, gangly, hysterical monk called Felix. Played by Clayton Greiman—new to town but clearly not new to the stage—Felix exudes a particularly creepy fervor, in the vein of Paul Dano’s Eli in There Will Be Blood. Where his costars ham it up, practically winking at the audience, Greiman tumbles so deeply into the role he seems to truly believe it. I thought he would cry when he told us that the second-rate convent in Bernay claimed they had the relics of Ste. Foy (recently purchased from a one-eyed monk), and their relics were working! The utter disgrace of it all! What charlatans!

And what a nifty idea. Suddenly, the dead Jew in the sack (something Olf picked up on the road, and dutifully brought back) is looking less like an inconvenience and more like a business opportunity. Now Martin, too, is caught with the gleam of greed in his eye. And just outside the door, the church graveyard is chock full of lucrative, ah … relics.

There’s something indefinably American about Incorruptible, though I’m not sure if it has anything to do with the play’s distinctly entrepreneurial spirit. The comedy may be dark (given the dead bodies and all) and cynical (given that the church is the one selling said dead bodies). However, the story itself is not nearly so hopeless, bleak, or absurd as it might have been, for example, in the hands of a Briton.

A single moment of poignancy temporarily slows the play’s bounding, giddy place. When Felix tells of his lost love, the mood turns somber—though careful listeners may discern that his love is, perhaps, not so lost after all.

Remember the one-eyed monk? He’s actually a minstrel named Jack. It turns out he’s the son-in-law of the peasant woman, married (except in the eyes of the church and the law) to her daughter, Marie (Tabatha Skanes). When the minstrel couple performs at the monastery at the urging of the peasant woman, Martin suspects that ol’ one-eyed Jack (Bob Peterson) is the one who sold the fake relics to the rival church. He holds him prisoner, forcing him to become a monk and do the dirty work of digging up parishioners’ remains. Soon there are something like 18 heads of John the Baptist floating around Europe.

But the real trouble is yet to come. One of the monks gets carried away and tells the Pope that there’s a genuine “incorruptible” to be found in Priseaux—that is, a saint so holy that his or her body flat refuses to decay. I’ll leave you to find out yourself how that one plays out. I’ll just say it gets pretty farcical, pretty fast. Also, Anita Schwaber turns up as a hilariously bossy nun.

Hollinger’s dialogue is clever, and filled with modern-day wit and strange little character details, as when the one-eyed minstrel self-consciously “finds his light,” or when the otherwise stately Charles succumbs to childish indignation over a sibling rivalry.

Incorruptible moves quickly, pausing only briefly to impart its cracked wisdom. See, the fake Ste. Foy worked miracles because the parishioners truly believed, sort of like how Dumbo was able to fly because he thought he had a magic feather. So … it’s all about having faith. Even if that faith means being exploited by monks in the business of John the Baptist heads. Oh, whatever. It’s a comedy, goddammit.