Time Stands Still is a play for voyeurs.

Watching this show is like peeping through the window of a Brooklyn apartment. Viewers get to watch lives play out realistically on the stage—from banal chatter to weighty conversation to heated arguments. Sordid relationships run their course as the audience stares.

The play works because the lives that it puts on display are multidimensional and fascinating. It all centers on a pair of war journalists—Sarah (Sabrina Pratt) and her boyfriend, James (Brent BC-Harvey). The couple are back in America after Sarah suffered a nearly fatal injury from a car bombing while reporting in Iraq. James had returned from Iraq a few months earlier and is wracked with guilt, feeling somewhat responsible for Sarah’s tragedy. This dynamic is the heart of the drama; it’s introduced early into the play and orbited around constantly until the end.

Sarah and James don’t have a happy relationship. Time Stands Still is essentially just two hours of watching love slowly crumble. It all happens very realistically; viewers see points of discontent pop up and fester until they eventually burst. It’s so lifelike that it can be a bit hard to watch at times—like seeing a couple break up at the table next to you in a restaurant.

This verisimilitude can wear a bit at times. When Sarah and James have their friends Richard (Gregg Wolff) and Mandy (Alpha O’Neal) over, it’s like watching polite small talk at a party—not very fun. That all changes when the stakes are raised in the second half, but the vapid chit-chat in the first half can edge on boring.

That’s no fault of the performers, though. Each of the four actors absolutely disappears into his or her character. They just seem like normal, albeit troubled, people. Each character has his or her own agenda and desires, and watching those inevitably clash is the most enjoyable part of the show. 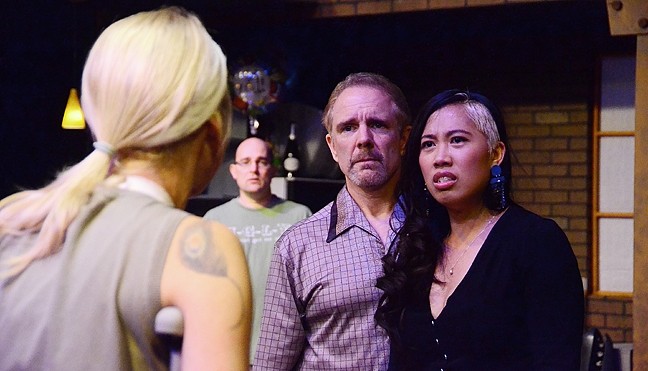 A play like this is where the diminutive size of the SLO Little Theater becomes a real boon. Viewers are right up next to the actors, and it makes the show even more intimate. It forces the viewer into the characters’ lives and invests them deeply into the relationships—making the drama devastating on a personal level.

As usual for a Little Theater production, the set is fantastic. The Brooklyn apartment—the play’s only location—feels real and lived in. From the impressive brick wall and window set piece to the little details like Netflix envelopes littering a table, the set designers thought of everything.

Time Stands Still occasionally grates when it forgets that it was trying to be realistic. Sometimes characters just start spouting vogue ideas—like the movie Brazil is “worth renting,” or people who have sex in horror movies always die, or flowers are a bad gift because you have to water them. This kind of random posturing distracts from the engrossing relationship drama; it’s sometimes reminiscent of Kevin Smith movies (which is not a good thing). The show also misses the mark when it comes to some of its weightier philosophical themes.

The subject matter seems like a slam-dunk. War reporting is a profession just dripping with dramatic potential. It really works as a backdrop for the intense relationship drama, but the play missteps whenever it tries to delve deeper. It asks questions about the morality of reporting on atrocities, but never answers them. The show falters when it spends too much time investigating journalistic ethics—Time Stands Still never gives any real insight on these topics, it just asks the obligatory questions and moves on.

Even with these minor gripes, Time Stands Still is worth seeing for anyone who wants to indulge their hidden voyeuristic tendencies. It’s tough, at times, to watch intimate relationship drama play out so realistically, but it’s ultimately rewarding. If you want to take a break from your boring life and watch someone else’s more interesting life for a couple of hours, then Time Stands Still is the show for you.

You can contact contributor Cliff Mathieson via Arts Editor Jessica Peña at jpena@newtimesslo.com.