Let’s play a game. If you could pair any two historical characters and have them chat in a bar, whom would you pick? Sure, you could go the serious, important route and throw Lincoln and Gandhi in a T.G.I. Friday’s. But, that’s far too predictable. You could edge a little on the weird side, and set up Richard Pryor and noted funny man King Louis XIV of France. You could even get creative and couple Genghis Khan and Marilyn Monroe for an evening of steamy, strange romance. Or, if you’re Steve Martin, you could pair two luminaries of the 20th century for an evening of drinks, dance, and conversation, which is exactly what he did for his play, Picasso at the Lapin Agile, the latest production from SLO Little Theatre. 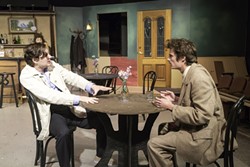 The year is 1904, and we’re at the aforementioned Lapin Agile—a cozy bar in Paris whose name roughly translates to “quick rabbit.” In that bar walks none other than a young Albert Einstein, one year before he would write his revolutionary theory on relativity. Also in that bar are some non-revolutionary theoretical scientists. There’s Freddy, the half-witted bar owner; his main gal, Germaine, the brains of the operation; and Gaston, an elder dandy with a prostate problem. Later, in saunters none other than Pablo Picasso, and thus, the games begin. This motley crew has convened at the Lapin Agile for various and sundry reasons (most of those reasons being women, even for the awkward Einstein), but what ensues is a passionate discourse on art, science, humor, romance, pee, and the nature of genius and creativity. So, it’s just your average situational comedy.

Only, it’s not. The set-up, even advertised by the Little Theatre as “So, Einstein and Picasso walk into a bar …” may sound a little forced, but come on people, this is Steve Martin. You know it’s going to be smart, funny, and absurd, with a little pathos thrown in for good measure. And, in this regard, the Little Theatre’s production does not disappoint. From the moment the lights switch on, and you hear the haggard, loony Gaston (Tom Ammon) state, with utmost matter-of-factness, “I have to pee,” you know you’re in good hands. 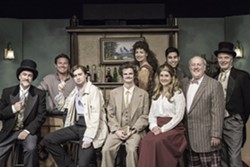 Under the direction of frequent Little Theatre collaborator, Suzy Newman, Picasso at the Lapin Agile quickly emerges as Cheers by way of Oscar Wilde. Einstein, played by Cameron Rose, arrives on the scene with a nimble wit, shooting down naysayers with equal parts arrogance and optimism. And, in the other corner, Toby Tropper swaggers onto the set as Pablo Picasso with so much magnetic charisma and boozy womanizing ways, you’d think he was more ’80s rock star than abstract artist. Together, the two strong personalities butt heads in a string of endlessly entertaining riffs, bolstered by the strength of the play’s ensemble cast.

Despite its title and the egos of its two leading characters, Picasso at the Lapin Agile is a group number. As Gaston, Tom Ammon punctuates the play’s heated discourse with the right amount of madcap lechery and urinary proclamations. Bobby Kendrick, as bartender Freddy, fills the fool's role well, and Megan C. C. Walker and Alicia Klein embody the mental sharpness and casual seductiveness of Germaine (Freddy’s girlfriend) and Suzanne (Picasso’s former lover). But, it’s Jamie Foster as Charles Dabernow Schmendiman who steals the show in the second half. He’s a crass, argyle-socked huckster whose claims at genius are a building material made of “asbestos, kitten paws, and radium” and the dunce hat. He’s an oddball, but a charming one in a cast and play that exudes the same joy and wonder that the work of Picasso and Einstein engender.

It’s no small wonder either, because this is the kind of screwball comedy that could easily veer off track. Steve Martin writes long, strange monologues about jokes that don’t work, numbers that don’t compute, and non-sequiturs about neo- and post-Romanticism. He’s dealing with heady material in a light-hearted way, and this is precisely the balance that the SLO Little Theatre gets right. These characters are never inaccessible, the pacing is rarely stilted, and the performances radiate with passion, chemistry, and camaraderie in a way that supports Martin’s script instead of squashes it. To quote the great Schmendiman, “Talent is the ability to say things well, but genius is the ability to, well, say things!” SLO Little Theatre’s Picasso at the Lapin Agile does both.

Jessica Peña left to go pee. You can  contact her at jpena@newtimesslo.com.