Many San Luis Obispo County schools will start this academic year without their veteran teachers. Some teachers had planned to retire, in other instances districts pushed for seasoned teachers to leave as a way to cut costs and avoid layoffs, because, very simply, new teachers are paid lower salaries. Consequently, SLO schools will have dozens of fresh new faces in front of the chalkboards.

The Paso Robles Joint Unified School District, which employs about 385 teachers for its roughly 7,000 students, had 20 teachers retire. In addition to those who had already planned to retire, the district provided an incentive package for teachers who were near retirement to step down early. Teachers at the top pay scale earn about $75,000 per year while new teachers receive about $40,000, Assistant Superintendent Greig Welch said. The district gave a portion of that salary difference to its early retirees, which was paid through an annuity account handled by Public Agency Retirement Services.

The Templeton Unified School District, which includes about 2,500 students, had seven teachers retire. The district saves about $30,000 per year when a veteran teacher is replaced with a relatively inexperienced teacher, and that differential funded retirement incentives for teachers to take early leave. This year was the last in which teachers in the district could keep their health insurance package until the age of 65. In the 2009-10 school year, retiring teachers will not be able to collect such benefits. 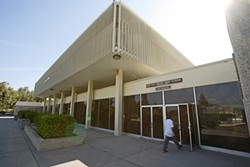 Not all teacher retirements were encouraged. According to several district officials, schools throughout the county and the state face losing an increasing number of teachers to retirement.

In addition to the 20 teachers who retired in Paso Robles Joint Unified, there are about 75 others who are eligible for retirement, Welch said.

Kevin Statom, president of the Lucia Mar Unified Teachers Association, said about 300 of the district’s 550 teachers are older than 50. Teachers typically retire at 55.

The 28 retirements in San Luis Coastal Unified represent about 5 percent of the district-wide teaching staff, according to Rick Robinett of the district’s personnel services.

“This is a trend that will continue,” he said.

With many teachers already retiring or about to, new teachers must be hired. Statewide, however, the number of teachers entering the workplace is shrinking and the tenuous state budget is making matters worse, according to the California Department of Education.

“Passionate and talented teachers will be pulled away to other states in search of job opportunities and economic stability,” State Schools Chief Jack O’Connell said in a news release.

While some California school districts are facing financial crises, districts that are financially able to hire new teachers have a greater selection than has been the case in the past. And as the number of teachers leaving their high-paying jobs behind grows, some local districts gain more latitude to cherry pick fresh college grads.

The high cost of living on the Central Coast usually has been a deterrent to new teachers at the bottom pay scales. In the past, Paso Robles Unified, for example, lost new applicants to districts in the Central Valley where it’s generally cheaper to live, Welch said. But now that many state school districts are handing out pink slips or simply not hiring, districts like Paso Robles have a significant pool of applicants from which to pull.

“Because of the state budget there are a number of very qualified, less expensive teachers available,” Welch said.

Although San Luis Obispo County is still a tough place for a new teacher to buy a home, Robinett said, San Luis Coastal Unified has replaced 25 of its 28 retirees with new teachers.

Lucia Mar Unified has replaced all but one of its openings created by retirees.

But for teachers, it’s still hard to find a job, said Kelly Smith, who will begin teaching sixth grade at Flamson Middle School this year. Smith has 11 years of teaching experience in San Luis Obispo and Santa Barbara Counties but the current economy makes it a challenge for any teacher to find a job, she said.

“I’ve been looking all summer,” she said. “And being a math teacher, which is supposed to be in demand, there were not very many openings for me in San Luis [Obispo] County.”

Staff writer Colin Rigley can be reached at crigley@newtimesslo.com