Trailing incumbent Jan Marx by more than 5 percentage points after Election Day, SLO Mayor-elect Heidi Harmon stubbornly—and as it turned out, wisely—pushed back when New Times called her for a concession statement on Nov. 9.

“There are still a few thousand votes to count, so I’m not sure what you want me to say,” Harmon responded resolutely at the time. 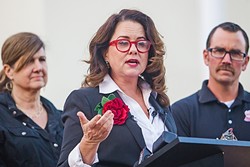 Harmon’s instincts were spot-on. In the ensuing weeks of vote tallying, Harmon chipped away at Marx’s lead, and on Nov. 23 won the seat by 47 votes.

At a press conference Nov. 28 on the steps of City Hall, Harmon addressed a crowd of roughly 50 supporters, reporters, and onlookers. With a signature red rose pinned to her suit jacket, Harmon thanked Marx for her years of service and asked the city to come together to move forward.

“We face so many challenges and opportunities. SLO really is at a crossroads,” Harmon said. “I’m asking every one of you to show up and lead this city with me.”

Harmon spoke about the city issues of homelessness, affordable housing, and welcoming more diversity to the community, as well as localizing the global issue of climate change.

“Together we can create meaningful solutions,” she said.

On tackling climate change, Harmon told New Times in an interview that she will initiate a conversation about what it will take for SLO to become a net-zero emissions city.

“City staff told me that it’s absolutely possible,” she said. “We’ll need to work out the details, to make sure it’s efficient, effective, and economically feasible. But I know that it’s possible. We just need that political will.”

Harmon said she will also support repealing the controversial Rental Housing Inspection Program, which was designed to hold landlords accountable to health and safety code standards.

“It’s not about repealing and walking away from protecting tenants,” she said. “We need to address that issue so renters can get support and remedy from the city, but in a way that doesn’t kick people out of their homes and doesn’t make the community feel like the city is against them in some way.”

Harmon said her victory is a landmark in a “real people-first movement” she’s been leading in SLO for almost a decade. She has also been politically active beyond city limits, supporting Bernie Sanders as a delegate at the Democratic National Convention in 2016. She also ran for California Assembly in 2014.

“I’ve been building something here, in terms of just being a community organizer here, gathering people, connecting people,” Harmon said.

On the campaign trail, Harmon’s critics, including Marx, harped on her lack of governing experience because she’s never served on a City Council, Planning Commission, or other city advisory body.

“I don’t think any of us should have any illusions about Heidi as [being] inexperienced,” Ashbaugh said. “I think Jan and many people probably made the mistake of underestimating Heidi Harmon and the very, very passionate character that she brings to any endeavor. She’s articulate, and she’s very smart.”