San Luis Obispo Mayor Erica Stewart is running to keep the office she was appointed to last year—announcing on April 25 her candidacy for mayor in the upcoming November election.

A member of the SLO City Council since 2018, Stewart stepped into the mayor's seat last October following the resignation of then Mayor Heidi Harmon. She received unanimous support from the council for her appointment. 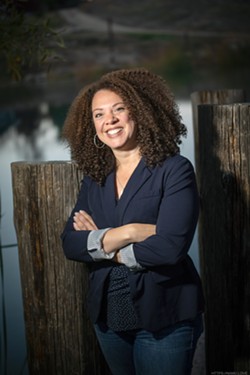 In her seven months as mayor, Stewart told New Times that she's experienced how "I get to be at a few more tables and lead more discussions," and has embraced that enhanced leadership role.

Describing her leadership style as one based on "respectful listening," Stewart said she wants to continue uniting the city around its big issues, like homelessness; public safety; diversity, equity, and inclusion; and housing.

"There's just so much to do," Stewart said. "We do not have the homelessness issue completely taken care in any way, shape, or form, but I do see us working on efforts to make change in our own city as well as our county. For me, I want to keep working on that issue and hopefully make additional change."

Stewart, whose day job is as the assistant director of personnel and marketing at Cal Poly Campus Health and Wellbeing, is the first mayoral candidate to file paperwork in the city.

Already endorsed by her four colleagues on the City Council, Stewart's campaign announcement describes her as a leader who can find common ground, and touts her "diverse professional background ... and history of volunteerism and philanthropy in the city and county."

Stewart is also the first Black mayor and City Council member in SLO's history. While she said it took some time for her to embrace that part of her identity in the context of her role at the city, Stewart has come to value its importance, as she sees how it inspires others.

"It took me a little while, but what it's meant to some people as a big step forward, I had to stop almost diminishing what it means," Stewart said. "I started to embrace it in that way, because I realize the more times there are firsts, there won't be firsts anymore."