Music with the Mayor can be live-streamed from SLO Mayor Heidi Harmon's house to yours, via her public Facebook and Instagram accounts, weekdays at 10 a.m.

The show must go on.

Music Time, a music program for preschoolers and their parents, originally held at Boo Boo Records for the past 21 years, has morphed into a live-streaming online show. It's now called Music with the Mayor, as the city's population practices social distancing amid the coronavirus pandemic. 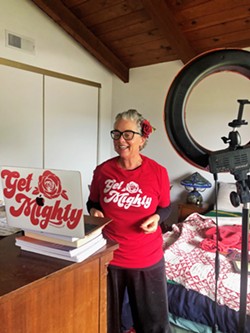 "The show is one of the small, hopefully impactful, things I can do right now," San Luis Obispo Mayor Heidi Harmon told New Times.

Live-streaming on Facebook and Instagram each weekday at 10 a.m. from her San Luis Obispo home, Harmon has added a laptop to the normally boom-box-only zone since she took the roughly half-hour show online starting Monday, March 16.

The mayor's Music Time show, once held every Wednesday at the downtown record store, has made her a familiar face to local children—a fact that made going online to connect with them each weekday the best option during a pandemic.

"A lot of kids are feeling their parents' stress. Kids are intuitive," she said. "I'm hoping that the music program will address that anxiety."

Her online streaming adventure has drawn a plethora of responses from her viewers, who have sent Harmon photos and videos of their children singing along to such classics as Raffi's "Shake Your Sillies Out," "The Wheels on the Bus," "Itsy Bitsy Spider," "Row Row Row Your Boat," and even a hand-washing song to the tune of "Twinkle Twinkle Little Star." 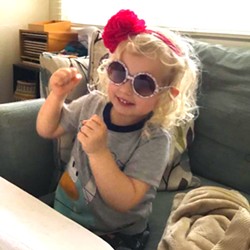 Between the two platforms, Facebook and Instagram, the mayor has received about 1,000 messages, she said. She is delighted at the feedback and believes that the show is helping those who watch, dance, and sing along with her every weekday morning.

"Movement relieves stress. Joy helps with immunity," Harmon said. "It's one thing I can do to help alleviate stress."

We talked and texted via cellphone for our interview in order to comply with social distancing recommendations. Without seeing the whole process go down live, I couldn't get the full idea of how she was putting on the show and mistakenly believed she had ditched her boom box, in favor of just a laptop. She quickly and humorously corrected.

You heard it here first. The mayor of SLO loves her boom box.

Harmon also loves the music program she, Boo Boo Records owner Mike White, and former record store employee Eileen Vavra came up with more than two decades ago. Their hope was to get children's music recognized, similar to what story time did for books at libraries and bookstores. Once the plan was set in place, it was Harmon who was tasked with getting someone to run it. Unable to find someone, she decided to do it herself. Who better than the mother of two small children, with a background in early childhood education, and who had taught preschool to boot.

Originally from Pasadena, Harmon came to the Central Coast to attend Cuesta College and later transferred to Cal Poly. She has called SLO home for more than 30 years, and since her college days she's been a climate change activist and community organizer, before she was elected to the office she's held since 2016.

Though sing-alongs aren't part of Harmon's job description as mayor, they've been a part of her life longer than she's been in office. And she has every intention of continuing her online show—helping preschoolers burn off energy by singing and dancing to classic children's songs—until the end of the shelter-in-place order, she said.

"I'm streaming it live to let people know I'm here for you in this moment," Harmon said. "It's a very stressful time. I want to honor that, but I also want to recognize how people are stepping up. Look how much love is really coming to the surface." Δ

Arts Writer Rebecca Howes is wiggling her waggles away. Send arts story tips to the editor at clanham@newtimesslo.com.