Having recently kicked off her reelection campaign, Harmon is asking voters for a third term in office—this time amid a pandemic, a crippled economy, and ongoing racial justice protests that have put the city under a national microscope.

The nature of the times, though, is a big reason why Harmon believes she's the best choice to lead the community.

"I do feel I have proven leadership on a lot of these issues we're grappling with," Harmon said. "Especially as we're faced with the unprecedented health and economic challenges of COVID-19, I think that consistency in leadership, and a lot of the relationships I and the council have built, are going to be crucial."

But three SLO residents who disagree will be looking to take that leadership role from Harmon this November. Two of her challengers have made unsuccessful runs for office in the past: welder Don Hendrick and activist and publisher Sandra Marshall-Eminger. 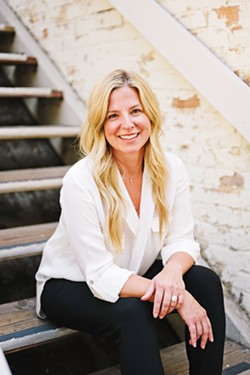 The other is downtown store owner Cherisse Sweeney, who emerged out of a coalition of local business owners and residents who'd grown dissatisfied with city leadership during COVID-19. Sweeney told New Times that she and her peers have found SLO's communication and economic planning to be lacking throughout the crisis. Meanwhile, many businesses have either closed or "are hanging by a thread," she said.

"We all became increasingly frustrated with the lack of information that was being passed down from our leadership," Sweeney said in a phone interview. "And we thought, 'Well, let's not complain about it. Let's do something about it. Let's try to find some good, qualified leadership that can help get us to this next phase.'"

"It wasn't even so much that our council wasn't doing a good job. It was, 'OK, tomorrow is going to be a new beginning,'" Sweeney explained. "If we're going to be reactive to the economic circumstances that we're in now, it's already too late."

Harmon said that she wants to continue leading the city through its COVID-19 recovery and to help facilitate dialogue around race, diversity, and belonging that have intensified since the start of the George Floyd protests in early June. She said she also has unfinished work around climate action, housing, and sustainable transportation.

"We need to trust that we're in the middle of something we don't know the outcome of—we're in the messy middle, I'd call it," Harmon said. "We want to do our best to meet the moment."

Harmon described SLO's response to the pandemic as "nimble," "flexible," and "fluid." She cited the city's installation of parklets at downtown restaurants, its launching of a small-business grant program, and its redesign of streets to support an outdoor economy as examples of those efforts.

"Actually, we've gotten a lot of good, positive feedback about our response to COVID," Harmon said. "Obviously this is an unprecedented challenge that every city is dealing with."

She added that the city has assembled a team of staff members solely focused on the economic recovery.

"We'll be looking at everything through the lens of recovery from COVID," Harmon said. "To expect perfection in an unprecedented situation like this is problematic."

But Sweeney maintained that the disconnect between the city and its businesses has been "nerve-wracking" and "created a lot of angst" for the downtown community. She believes that she can bring a more attuned perspective to the mayor's office as both a business owner and a mother.

"What I do think we're lacking right now in this next phase for our city is it needs to be run like a business," Sweeney said. "I think our budget and safety need to be our top priorities right now in order for everything else to fall into line."

Safety and cleanliness in the downtown is a key focus for Sweeney. She said that she's watched homelessness and drug abuse spiral out of control downtown—peaking during the COIVD-19 stay-at-home orders.

"I wouldn't even let my kids walk into Mission Plaza by themselves because I didn't feel like it was safe. I have to usher people out of the store often who wander in who are usually intoxicated or high. This was before COVID," Sweeney said. "And during COVID, I was still going downtown every day and it was becoming increasingly more apparent what a problem it was.

"We have a really bad drug problem in our city and our county," she continued. "I've realized that the [drug and mental health treatment] resources are limited and they're hard to get."

Sweeney's concern for downtown safety and vitality recently collided with the Black Lives Matter movement. Basalt Interiors was one of the downtown businesses that boarded up in anticipation of a protest in early June. Sweeney said that she's had contentious conversations with activists since.

"For a lot of us, it had nothing to do with whether or not we were in support of this movement. It was a reaction to what we were seeing happening around our nation and surrounding cities and counties," Sweeney said. "None of us knew what to expect. Everyone was trying to preserve what we had left to be able to open back up."

Speaking on whether SLO has a racism problem, Sweeney said that "what's really important is to first dissect and address and really look into where those instances occur, and then address it."

"Right now, a lot of people are making assumptions without getting the facts," she said. "Let's get the facts first, find out where it happens, how it's happening, and come up with some smart solutions."

Harmon, who's expressed support for the local movement, said that the turmoil surrounding the protests and the July arrest of organizer Tianna Arata has "unfortunately been used to sow more division in our community."

"Now that the charges [against Arata] are understood—and I'm grateful there are no felony charges—I'm truly hopeful that we can refocus on the bigger picture and recognize that this is an issue we have to step up to as a community," Harmon said. "I would hope that the broader community of SLO agrees that we come from a shared desire to move through our community without fear and have that sense of belonging.

"And the thing is, certain people don't feel welcome here and that's been made really, really clear." Δ