SLO Mayor Heidi Harmon called for unity after a flag and sign outside her home were vandalized in what police are characterizing as a possible hate crime. 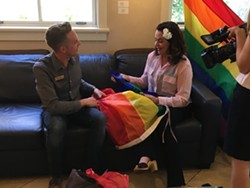 In a written statement sent to local media outlets, Harmon said that an unknown vandal burned a rainbow flag, a symbol often associated with the gay rights movement, and slashed a yard sign promoting civil rights outside her home on the night of May 31. The SLO Police Department initially did not release Harmon's name in connection with the incident, but Harmon later confirmed she was the victim in her statement.

&quotIt is disheartening more than anything to see this type of negative action when I believe that so much can be accomplished through meaningful dialogue, even when there are differing opinions," Harmon wrote.

The vandalism of the mayor's home occurred after another high-profile controversy involving SLO's LGBTQ community in May, when a SLO High School special education teacher penned a letter in the school's newspaper, which quoted biblical scripture and appeared to indicate that LGBTQ students &quotdeserved to die." The letter drew a firestorm of criticism from local LGBTQ advocates, including Harmon, who staged a demonstration outside the school shortly after the letter was printed. The teacher then resigned from his position.

The vandalism occurred on the eve of the first night of June, commonly recognized as LGTBQ pride month in the U.S. In her statement, Harmon said she stood with those who felt &quotthreatened, frustrated, misunderstood, and marginalized," and referenced growing concern over hate-related incidents across the country.

&quotWe are in a time in history where personal attacks have been normalized on a national level, and we see that type of behavior replicated across the country," Harmon wrote. &quotThis is uncalled for and unacceptable."

SLO Police said they are investigating the vandalism at Harmon's home, but had not arrested any suspects as of June 2. In a written statement on the incident, the department encouraged victims of hate crimes to report them law enforcement, and encouraged LGBTQ victims to contact the Gay and Lesbian Alliance of SLO County for support and resources.