What's it rated? Not rated
What's it worth, Anna? Full price
What's it worth, Glen? Full priceWhere's it showing? Virtual or in-person screening on Dec. 5, from 5 to 8 p.m., through SLO Motion Film, either at Whalebird Kombucha or slomotionfilm.com/events/stoke-chasers

Two local filmmakers—Jo Anna Edmison and Chris Burkard—will screen their short films at a SLO Motion Film event on Saturday, Dec. 5, from 5 to 8 p.m. Edmison's 16mm eight-minute film explores a group of young women who break into the male-dominated skate and surf scene, with lots of recognizable local scenery. Burkard's Unnur is a 17-minute documentary about Icelandic surfer and photographer Elli Thor, his near-death kayaking experience, how fatherhood changed him, and his deep desire to pass on his love of the outdoors to his young daughter, Unnur.

Glen I'm often blown away but how much power can be packed into a short film, and these two shorts by local filmmakers are both worth seeing. Jo Anna Edmison's Stoke Chasers was shot on 16mm, lending it an air of nostalgia, and with a filter that gives the footage a quintessential California feel. You see young women skateboarding and surfing, with narration that explains how women are all too often discounted and discouraged from trying "dangerous" sports. Burkard's Unnur brings viewers to the wilds of Iceland and depicts the life-changing experience of parenthood. Elli Thor wants to pass to his daughter, Unnur, his love of a simpler, wilder, more natural life, one that's not about chasing money but instead chasing experiences that nurture the soul. Unlike the decidedly lo-fi no-budget feeling of Stoke Chasers, Unnur is gorgeously shot and captures Iceland's inhospitable beauty. They're very different films but share a love for adventure and taking the path less traveled. The filmmakers will talk about their craft as well as entering their films in film festivals amid the COVID-19 pandemic. 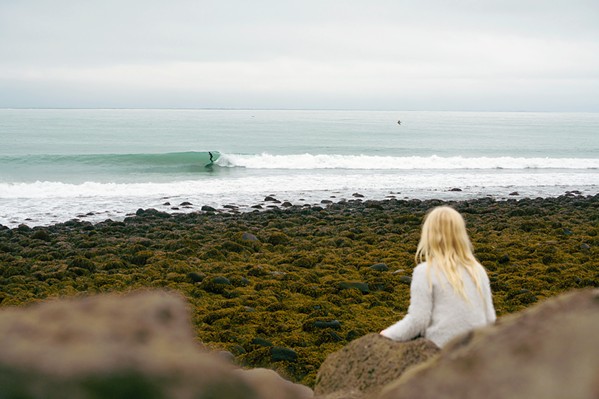 Anna Both films deal with the feeling of being an "other." Stoke Chasers confronts the idea of being a girl in what has always been seen as "boy sports," and Unnur explores the conscious choice of wilder living and focusing on connection with nature over having the conventions of a "normal" life where a big home and steady job are your focus. Any woman who has gotten into skating or surfing knows the reality of showing up and being the only female out there and how intimidating that can be. Luckily, our culture is changing to reflect the reality that women are not lacking in ability or strength in these traditionally male scenes, and watching the young women in Stoke Chasers is beautiful affirmation of that. Unnur is Thor's love story to his daughter and his chosen path to raise her with appreciation for nature and adventure at the forefront. It's beautiful to hear his struggle within that as well. Will she ever know that her upbringing was unusual and her quest for adventure born from it? Will there be resentment of a life that differs from others? Wholly beautiful with epic shots of the remote Icelandic spots they travel to, Burkard takes us on a short but compelling journey through Thor's path in life. Both of these films are absolutely worth tuning in for, and I'm very much looking forward to hearing from the filmmakers themselves on their journeys. Δ