SLO moves to rid parks of tents amid influx of homeless

San Luis Obispo city parks will soon get new signage to communicate a ban on camping-style tents on park grounds—a move that comes as a growing number of homeless residents have sought shelter at public squares like Mitchell Park.

With more tents popping up across the park in recent months, resident complaints and concerns about maintenance and safety spurred the city to review its ordinances related to daytime camping, officials said. 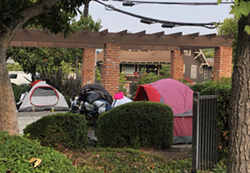 "The tents are a new thing and it's a different dynamic," SLO Parks and Recreation Director Greg Avakian said. "The impact to the park areas is kind of multi-faceted. You have impacts to the park property. You have the safety concern of what is occurring in an enclosed area. And we have families and children who are feeling very unsafe going near an enclosed tent."

Citing an existing city code about encroachment, Avakian said that having enclosed tents at parks is not allowed day or night. Over the past several weeks, police, city officials, and service providers have visited the park to "make contact" with individuals using tents.

"We're looking at an educational approach," Avakian said. "That'll occur for another week or two weeks before we start making a more firm stance. We're able to hopefully connect these individuals with resources so they can get food, water, and shelter through the county services."

Police also arrested three individuals at the park on Feb. 19 on charges reportedly unrelated to tents and camping. On Feb. 21, the situation hit a tragic low when a man was found deceased at the park. His death is under investigation.

While tents may be new to Mitchell Park, homeless advocates say they are in large part a result of the recent clearing out of past encampments in other areas.

"Folks have been displaced and there are fewer places for them to go," said Michelle Mansker, of SLO Street Medics, a volunteer team of locals trained in first-aid response assisting individuals without shelter. "It's more visible to people. When they were in the creek or other areas, we don't see them. But now they're doing patrols down there. Where else are these folks going to go?"

SLO officials often emphasize that the 40 Prado shelter, operated by CAPSLO, has beds available. But Mansker said that's not the best solution for everybody or a safe place to be during the COVID-19 pandemic. For several weeks in December and January, 40 Prado was closed due to a virus outbreak.

"I personally would not want to be in a dorm room," Mansker said. "I have nothing against Prado, but for some people that's not viable. It's not a one-size-fits-all solution.

"I understand that the visual [of tents] doesn't look good," she continued. "But it's always the generic response and never, why are people unhoused? What can we do to help? What services are we not offering?"

At its Feb. 16 meeting, the SLO City Council heard from activists who also criticized the move to enforce against tents. In response, Mayor Heidi Harmon said that the city is taking more steps on homelessness—recently adding the issue to its list of major city goals. But city officials also point out that SLO County is ultimately responsible for delivering social services to the community.

"I do want to make sure people know that we actually do a lot on homelessness. I think it often goes unnoticed because the problem continues to grow," Harmon said. "It needs to be more of a focus." Δ