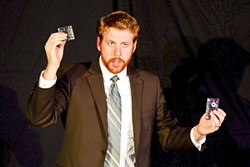 In the fall of 2008, Proposition 8 passed in California, thereby banning same-sex marriage within the state. It was an intensely controversial measure, only abetted by its public support from wealthy conservatives and the Church of Latter-Day Saints. At the same time, San Luis Obispo native Ben Abbott was studying theater at PCPA. His two worlds were colliding; he had gay friends and he
was Mormon.

After graduating from PCPA, Abbott attended UC Berkeley where he was given a chance to write and produce his own play as part of his thesis. So, he conceived of a one-man show that would reconcile these two seemingly conflicting facets of his life. Inspired by the documentary style of Anna Deavere Smith’s plays, he began contacting gay and lesbian Mormons to hear their varied and private experiences of struggle, breakthrough, and acceptance. Now, that show, Questions of the Heart: Gay Mormons and the Search for Identity, is coming to the Steynberg Gallery in San Luis Obispo on Sept. 2 and 3. I recently spoke with Abbott over the phone about his play, religion, politics, and the experience of performing at both a Mormon church and a gay bar.

NEW TIMES So, how did you go about interviewing gay and lesbian Mormons since it can be such a delicate subject?

BEN ABBOTT One of the things that helped, that made a real difference, was that I was coming from a place of curiosity. There was no ulterior motive. When I talked to a couple of people, you know, they sized me up, but then they connected me with other people. I did talk to a couple of people who were hesitant, like, “It’s not that I’m in the closet, but not everyone else knows.” One guy I was talking to, it was Christmas Eve, and he was at his in-laws’ house, and he was like, “We have to be a little bit quiet; not everyone knows.” The whole experience was hugely humbling, and I was just so honored.

NEW TIMES What do you think made everyone willing to tell you these very personal stories?

ABBOTT Everyone was excited to have their story told, in a way that was not being used to make some other point. The whole goal is to tell their story and generate empathy among people who may not agree with the direction of their lives.

NEW TIMES Was this goal part of what you had anticipated when you first began work on the play?

ABBOTT I wanted to make something that had a creative vocabulary where Mormons can talk about it. If you can’t talk about it, no movement can be taken. Silence breeds fear. So, it’s to generate a conversation not just for Mormons, but for everybody. To create a dialogue that is not happening. Whether it’s in the church or not, some don’t know how to approach the issue.

NEW TIMES I’m curious. What’s the reaction been like, both from Mormons and non-Mormons?

ABBOTT Some think they are coming to a show about gay Mormons, but the themes are pretty universal. A lot of people express surprise. You know, change a couple of nouns and this could’ve been about a Catholic, or even those who are not religious. It’s about the struggle to reconcile parts of your identity that seem to be in conflict.

NEW TIMES Are there maybe one or two stories that stand out to you as being the most surprising, or maybe the ones that changed your perspective?

ABBOTT There’s a story that throws people off, of a mixed-orientation marriage—a gay man married to a straight woman. They’re public about it now, but it really bothers a lot of people. And then, he gets bothered when people go and tell him what to do. He’s very quick to say that this is not something to recommend. It’s very interesting. He’s a lovely, lovely guy, and they’re a very strong couple.

NEW TIMES What about his relationship bothered people in particular?

ABBOTT In part, because there was a time when, in the church—and Mormons aren’t the only people—when people would say that’s what you would do. You know, find a woman and make it work. And, there are stories of couples who have been severely damaged; even if you’re open about it, it doesn’t work and it can be painful. So, some are bothered by him because of this history of mixed-orientation marriages, that this is taking us back 20 years. It surprises people.

NEW TIMES Have you seen a trend toward more acceptance and openness regarding gays in the Mormon church more recently?

ABBOTT As a theater person and a playwright, there’s been a slow trend of people being more open and people talking about it. It’s hard ’cause I feel there are a lot of good stories coming out of the church, but I always have to be careful as if I’m trying to whitewash things. I am Mormon, so there is an impulse to say that I am defending the church. The Mormon church is interesting because it has a past of feeling persecution. Every Mormon growing up, part of the experience is being different and weird, and thought of as weird. So, there is this defensive wall, and image is really important to us. So, people on the outside say, “No, you aren’t allowed to criticize the church.” But, all religious organizations are like that. This show is safe for Mormons to go to. People will assume it’s going to attack the church, but orthodox members of the church have seen it and liked it. It’s not a churchy show.

NEW TIMES How do you think the show appeals to both non-Mormons and Mormons then?

ABBOTT One of my favorite things to hear when Mormons come to the show is they saw, “What do non-Mormons get out of this?” Then, non-Mormons ask the same thing. They can’t imagine the other group would be interested. It feels very genuine. It’s like getting an opportunity to peek into a private dinner conversation, really see and not be the polished PR image. Mormons will say it’s a glimpse of people they never thought about, and then gay people or anyone else will say it gave them a new glimpse of people.

NEW TIMES You had mentioned to me that you performed this show at a Mormon church. How did that come about and what was the reaction there?

ABBOTT I was in Indiana, performed it at the Indianapolis Fringe Festival, and people from the church came to see it. The bishop’s wife had seen it and really, really liked it, so she asked, “Can Ben do a performance at church?” At the same time, I was thinking I would love to do this at church, but I didn’t know if the bishop would be comfortable. Then, I approached the bishop, and we had this kind of fireside performance with a huge turnout in the big room. It was a great thing. People who would never go to a theater to see this show came. We had an opening prayer, a talkback, and refreshments.

NEW TIMES I can only assume that talkback was much different than the usual ones. What was that conversation?

ABBOTT It was an extremely different talkback. Everyone was a member and in the same church, so they knew the ward’s history. It was amazing—this ward family taking stock of, “How are we doing on this?” “How do we measure up with the pain that’s been caused?” I felt honored, almost like a sacred experience. This show created the venue for them to have some real talk. Let’s talk about what we’ve done wrong. And then, two weeks later, I’m performing in a gay bar. It was fantastic.

NEW TIMES For you as an actor and playwright, are these kinds of experiences and reactions why you got into theater in the first place?

ABBOTT I like connecting people and presenting something that would be a challenge to an assumption. I want people to think about things in a different way, take them by the hand, and experience some empathy. That is how growth, and movement, and evolution can happen.

You can find Jessica Peña at the gay bar or at jpena@newtimesslo.com.