Permission To Eat: A practical guide to working yourself out of an eating disorder during college, while celebrating the awesomeness that is you! by Libby Parker is available on Amazon for $24.92 in hardback and $16.99 in paperback.

Food is such a basic, integral part of our everyday life that most of us don't give it a second thought. But according to San Luis Obispo dietician Libby Parker, most of us are doing it wrong.

Now Parker—a recipient of the "SLO Top 20 Under 40" in 2017—isn't here to preach the gospel of paleo or keto or even veganism. Parker is here to promote the simple act of eating, period, with no guilt attached. 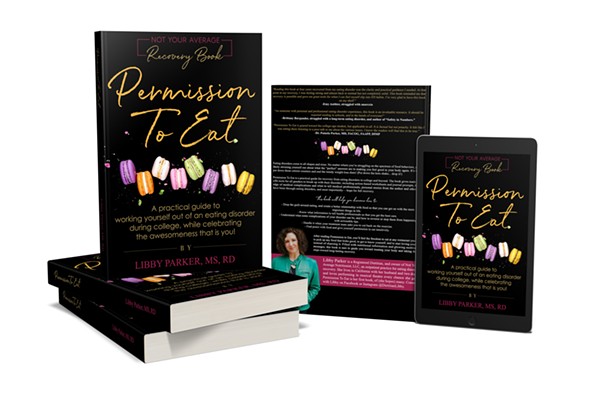 Most of Parker's work as a dietician is geared toward the Cal Poly population, as roughly 50 percent of college females will experience eating disorders. Thus Parker's new (and first) book, Permission To Eat: A practical guide to working yourself out of an eating disorder during college, while celebrating the awesomeness that is you! (released in May), provides actionable steps to work college students out of the anxiety and frustration that their eating disorder imparts.

Parker spoke with New Times about disordered eating, actionable steps to recovery, and which foods she's given herself permission to eat.

New Times: Why write Permission To Eat specifically for a college audience? 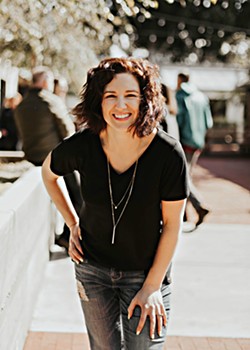 LP: If we're cutting out entire food groups or labeling food as good or bad, that's disordered eating. A lot of my clients that I see are over exercising. If you're exercising when you're sick, injured, or exercising at the expense of social events, or not taking rest days, those would all be red flags.

NT: What advice or step typically serves as a light-bulb moment for your clients?

LP: The biggest concept that people struggle with is that all foods fit in a healthy diet and there are no good and bad foods. Foods are just neutral. Once that resonates, they realize they're using food to cope or numb out from the stressors of life.

NT: What tools does your book provide readers struggling with disordered eating?

LP: Overall there's lots of different tools and activities that I use with my clients. People who restrict what they eat, people who chew and spit, people who binge eat—there's lots of actionable steps for everyone. There's also a section on how to talk with your doctor because saying, "I have an eating disorder," really changes the lens through which your doctor is going to treat you.

NT: What have you given yourself permission to eat?

LP: The biggest thing for me was giving myself permission to eat meat again. It tastes good, I'm not eating huge portions of it, and it's a good source of protein.

NT: What actionable first step can someone with an eating disorder take today to begin recovering?

LP: Tell someone what's going on. If you have a good relationship with a professional, start there. But confide in someone, a friend or a relative. Eating disorders are so isolating, and the people who have social support are the ones who have better long-term outcomes. Δ

Arts Writer Ryah Cooley is an omnivore. Contact her at rcooley@newtimesslo.com.