The Carnevale di Venezia exhibit at
the SLO Museum of Art will be on display
through Dec. 31. Visit sloma.org for more information.

At sunrise, they appeared.

Hundreds and hundreds of models from all over the world were decked out in the most elegant and intricate of dresses, capes, and hats in purples, pinks, oranges, reds, and more. But everyone's face was covered with nearly identical white masks, iconic of Venice's Carnevale.

After San Luis Obispo photographer Peggy Jansson saw that photographer Jim Zuckerman was offering photo workshops at the notorious event, she knew she had to go. 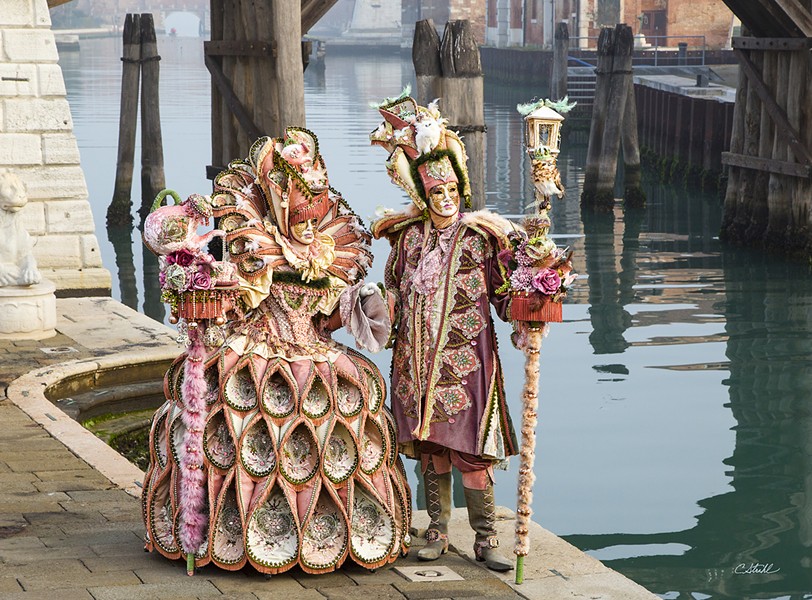 "He traditionally goes to Venice for two weeks of Carnevale every year," Jansson said. "It's a big mecca. I just thought it would be a fabulous time to go to Venice, and it was."

Jansson convinced her travel buddy, Atascadero-based photographer Cheryl Strahl, to join her, and the pair took off for Italy at the end of January 2016. Their work is currently on display as the Carnevale di Venezia exhibit at the SLO Museum of Art.

For a week, the two were up before the sun, out at iconic spots like Piazza San Marco to await the hordes of models partaking in a tradition that goes back to 1162. The festival is world famous for its elaborate masks, which are said to be a distinctly Venetian rebellion in response to the area's formerly rigid class system.

Most of the models aren't there for money though, according to Jansson and Strahl. Many fund their own elaborate costumes and find their way to Venice for the festival, carrying businesses cards with their costumed photo on them so the photographers might send them a photo as a thank you.

"It's a passion of theirs," Jansson said.

The duo worked with two female models from Austria for several days and then had quite the shock when they later ran into them—without masks.

While Jansson's photos could almost be mistaken for a whimsical painting, Strahl's feel grittier and grounded, like you're right there on the streets of Venice with her. The two shot models in a palace, a bordello-like hotel room, the island of Murano, canals, gondolas, and the Bridge of Sighs.

While anyone would be hard pressed to walk away from the Carnevale di Venezia exhibit and not be deeply struck by the festival's beauty, Jansson and Strahl hope viewers take away even more than that.

For instance: "An appreciation for the artisans that these Venetians are," as Strahl put it.

"And who doesn't love Italy?" Jansson chimed in.

Arts Editor Ryah Cooley is into the kind of masks that wash off and rejuvenate the skin at rcooley@newtimesslo.com.