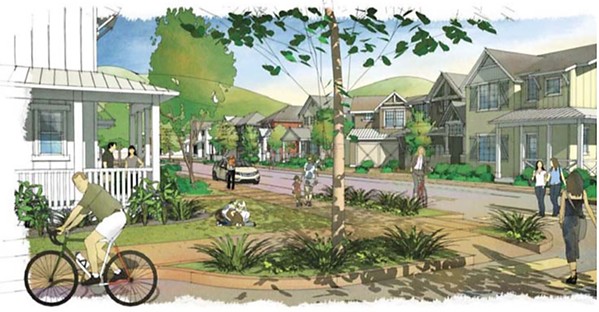 Those policies could include fees on natural gas in new buildings to offset their contribution to climate change and help fund rebates for appliance retrofits.

The overall goal is to sharply curb the emissions coming from SLO’s building sector, which, despite dropping by 21 percent since 2005, still account for 18 percent of citywide emissions.

SLO leaders say it’s the right time to make the code changes with two major developments—San Luis Ranch and Avila Ranch—starting construction in 2019-20, and some 4,600 housing units and 5 million square-feet of nonresidential space planned in total by 2035.

City Council members offered their unanimous support during a Feb. 19 study session about the issue.

“I think this is absolutely an effort we need to pursue,” Mayor Heidi Harmon said.

The future building codes, which are set to come back to the City Council for approval this summer, will aim for all-electric development.

Since SLO will start sourcing its electricity from Monterey Bay Community Power in 2020, a Community Choice Energy agency with a carbon-free supply, natural gas will emerge as the primary source of building emissions going forward, a city staff report stated.

While the city can’t outright prohibit natural gas in new development, it can require that certain electric systems be installed, like electric air source heat pumps for space heating. It can also require builders to pay fees to offset their GHG emissions.

“We’d say, ‘Sure you can install [natural gas] but there would be a price to do so,’” Sustainability Manager Chris Read said, explaining a hypothetical carbon offset program, “and the price would reflect the impacts of climate change in our community, and [be] used to fund future retrofit programs.”

SLO will first study the cost effectiveness of implementing a future “reach” code—which has to show that its practical costs would be equal to or less than the state’s code—to get approval from the California Energy Commission.

While city officials see the new codes as an important step to curbing emissions in new projects, buildings that already exist will still make up the majority of SLO’s projected stock in 2035. Identifying tools to retrofit those buildings with carbon-neutral electric appliances will be the long-term challenge.

“The retrofit program is probably the most exciting part of this when you think about how much we do have with older buildings and existing housing stock,” Councilmember Aaron Gomez said. “I think a huge barrier to that is just simple cost. You have electrical upgrades you have to do just to get them ready for these appliances.”

SLO joins a handful of cities in California, including Santa Monica, West Hollywood, Palo Alto, and Fremont, that are looking beyond state codes to achieve more ambitious climate goals.

Eric Veium, who chairs the SLO Climate Coalition, a group of sustainability professionals and community members providing input to the city on climate policies, reminded council members of this leadership role.