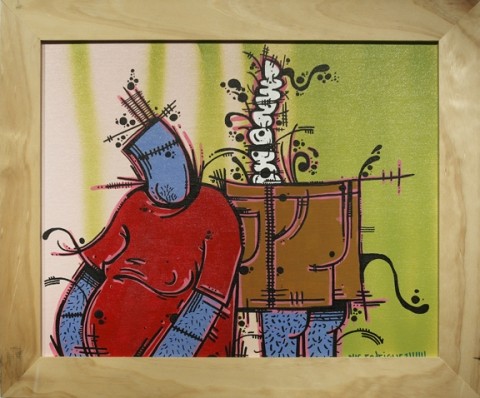 Police released a mug shot of the man--his dark hair slightly disheveled as if he'd been roused from bed--and a photo of some spray cans next to a painting mask.

Rodriguez runs a website at peopleater.com, a sort of online gallery for graffiti-style art. In addition to his canvases, which go for about $400 to $500 on the site, he sells shoes, bags, and stickers--most of which are being held as evidence, according to the website.

He is also one of several artists scheduled to be in an April 4 collective exhibit, called Urban Escapades, at the Jeff Claassen Gallery in San Luis Obispo.

Rodriguez wasn't available for comment as of press time, but he released a statement on his website, right below his booking photo. He said that police have blamed him for a sticker epidemic despite the fact that he's made and given away thousands of such stickers as underground promotions for the Peopl Eater collective.

"With imitation the sincerest form of flattery," the statement said, "and just picking up momentum as an artistic movement, PILO pieces began surfacing on the streets of San Luis."

Most of the suspected Rodriguez graffiti under scrutiny by the police is in the form of stickers, with a few examples of spray-painted designs, concentrated around his neighborhood and Cal Poly, according to police. On his site, Rodriguez did ask people to stop putting up his stickers. 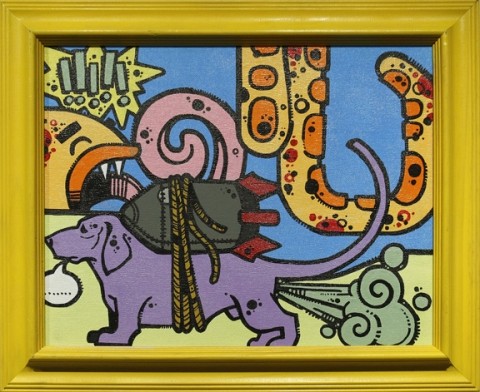 # SLO police estimate that the damage done by Rodriguez's stickers and the PILO tagging runs into the thousands of dollars, hence the felony charges.

Rodriguez doesn't have any prior convictions related to graffiti, and SLO Police Department's Lt. Bill Proll said the arrest and warrant are unusual for this type of crime--Rodriguez wasn't caught in the act of vandalism, but was arrested after a months-long investigation, he said.

Proll said police were responding to complaints from the public.

Rodriguez's style is fairly unmistakable: high contrast, bright colors, and creatures outlined and shaded with thick black lines. Rodriguez doesn't make a clear distinction between his own name and the PILO moniker on the website.

However, in a biographical statement posted before his arrest, Rodriguez claims that he quit painting on walls in 2006 when he launched the Peopl Eater website. He has since created several commissioned pieces on private property.