San Luis Obispo Police Chief Deanna Cantrell received disciplinary actions from the city manager's office for a July 10 incident in which she lost her firearm after leaving it unattended in a restaurant bathroom. 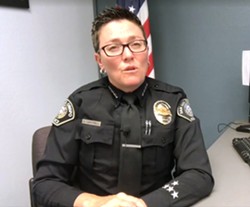 In a July 17 announcement, City Manager Derek Johnson said Cantrell will receive three "consequences and follow-up actions": a one-time pay reduction of $1,598—equivalent to a two-day unpaid suspension—with documentation in her personnel file; training in firearm safety practices; and a personal discussion with all police department members about the incident and the lessons learned that apply to all firearm-carrying officers.

During a lunch break at El Pollo Loco in SLO on July 10, Cantrell used a gender-neutral restroom and left her gun behind in it. Realizing her mistake "within minutes," she went back to retrieve the gun but it was gone.

"I was complacent, and that's something you can never be with a firearm," Cantrell said later in a videotaped apology on the SLO Police Department (SLOPD)'s Facebook page.

Johnson said in the statement that an independent investigation was completed quickly because Cantrell was "transparent and forthcoming" in reporting the incident and cooperated fully during the investigation.

Quickly obtained surveillance footage from the restaurant showed that three individuals entered the restroom after Cantrell. The second two people—one a 10-year-old boy—reported having not seen the weapon. SLOPD circulated surveillance images of the first individual, a man, who they believed took the gun.

The next day, July 11, at around 7 p.m., a man who identified himself as the brother-in-law of Skeeter Carlos Mangan, 30, of Los Osos, contacted sheriff's authorities to tell them Mangan had Cantrell's gun, according to SLOPD officials. The brother-in-law then delivered the weapon to the sheriff substation in Los Osos.

After completing an investigation, the SLOPD was close to filing a case with the SLO County District Attorney's Office for possible charges against Mangan for possession of stolen property, SLOPD Capt. Chris Staley told New Times on July 17.

"Either today or tomorrow," Staley said. "We looked at a number of different charges."

Police interviews with Mangan indicated that he did not use—and did not have plans to use—the weapon. The gun itself did not have identifying characteristics that would show it belonged to a police officer or Cantrell, Staley said.

The incident—the first case of a lost or stolen officer weapon at SLOPD in at least five years—drew both outrage and outpourings of support for Cantrell, who's helmed SLOPD for 3 1/2 years.

Cantrell was lauded by many, including Mayor Heidi Harmon, for taking responsibility for the mistake and welcoming accountability.

"My actions were irresponsible and dangerous," Cantrell said in the apology video. "I expect more from myself as a person and especially as a police officer that's carried a firearm for 25 years. I expect to be held accountable."

According to the city manager's office, there were two "unintended city policy violations": 1) SLO Police Department Policy 311.3.5, "The handgun shall be carried concealed at all times and in such a manner as to prevent unintentional cocking, discharge, or loss of physical control," and 2) SLO Police Department Policy 339.5.10, "Failure to observe or violating department safety standards or safe working practices."

Johnson said multiple times in the statement that Cantrell displayed integrity throughout the incident.

"I continue to have confidence in Chief Cantrell's leadership of the police department in a positive and professional manner," Johnson said, noting that the matter concerning the chief won't be forwarded to the DA's Office because it doesn't meet legal criteria for criminal prosecution.

"I have no doubts that this experience will drive Chief Cantrell to be even more vigilant," Johnson continued in the statement, "in both her leadership of the department and her own personal conduct."

While some residents on social media had called for Cantrell's termination, others, including many who attended the July 16 council meeting, backed her and her overall record as chief.

"I don't expect law enforcement to be perfect. What I do expect law enforcement to do is to be open and honest and transparent and accountable," Leola Dublin Macmillan, a resident and member of SLOPD's Police and Community Together initiative, said to the City Council. "As a black woman living in SLO, I take great comfort in knowing that I have a chief that I don't worry about covering up the truth." Δ