The San Luis Obispo Police Department (SLOPD) is preparing an after action report to identify "lessons learned" and "what worked well" during recent city protests, including one on June 1 that ended with officers using tear gas, pepper balls, and flash bangs to disperse a crowd of demonstrators on Santa Rosa Street. 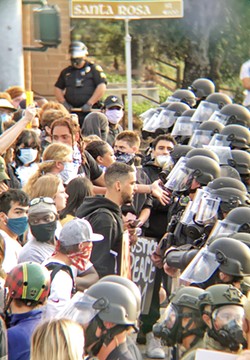 "I think it will be enlightening as to how we can all do better," SLO Police Chief Deanna Cantrell said on June 16 at a SLO City Council meeting. "We're compiling right now all of the body-worn video—there was a considerable amount of video—[and] all of the drone footage, all of the police reports."

Law enforcement agencies typically undertake after action reports following an emergency, training exercise, or large-scale public event. The report provides "all participants the opportunity to reflect" and to "identify promising practices and lessons learned," according to the U.S. Department of Justice.

The SLOPD's protest report will only encapsulate law enforcement's perspective on the events. It will account for the total resources spent on its response, including money, personnel, and details like the amount of tear gas, pepper balls, and flash bangs deployed on June 1.

SLOPD Capt. Jeff Smith told New Times that the report could be complete within the next month, but that SLOPD may choose to outsource it to a consultant, "which could take longer." He said the report will be made public when it's complete.

During the June 16 City Council meeting, Mayor Heidi Harmon asked if Cantrell could reach out to the protesters to gather their testimony on the incidents, which the chief agreed to do after the report is finished.

"Maybe at that point we can set up some community discussion," Cantrell said.

Because the report is still in progress, the city has denied public records requests for all officer body camera footage, drone footage, and police reports related to the protests.

Yet, some data and information was released. The city estimated that protests spanning May 31 and June 19 cost law enforcement more than $250,000. The June 1 protest—which involved protesters blocking Highway 101 and police later using tear gas against protesters who allegedly hurled rocks, bottles, and fireworks—drew 172 sworn officers. Those included 44 officers from the SLOPD, 60 from the Sheriff's Office, 30 from Highway Patrol, and 28 from other local city departments, the California Men's Colony, and the Cal Poly Police Department. Six student protesters were arrested in the incident.

SLOPD also spent more than $1,000 on food, like sandwiches, between June 2 and 4. On June 2, the city bought more than $1,000 worth of plywood, which was "for a variety of purposes including boarding up windows at city facilities and businesses that have been broken," according to Deputy City Manager Greg Hermann.

While vandals broke windows at three downtown businesses and the SLO Department of Parks and Recreation office on June 2, police have not reported a connection between that incident and the protests. Δ