SLO prepares for another clear-out of Bob Jones homeless camp

Just five months after the last homeless camp cleanup on the Bob Jones Trail, the city of San Luis Obispo is preparing for another in the same area slated for Oct. 19, a move that's drawing criticism from homeless advocates due to the ongoing COVID-19 pandemic and recent positive cases at the 40 Prado Homeless Services Center.

Assistant City Manager Shelly Stanwyck said the upcoming cleanup is an effort to address the health and safety concerns at the camp, which is situated along the Bob Jones Trail and San Luis Obispo Creek. Homeless camps near SLO Creek are always problematic, because drainage from piling trash, rodents, bugs, and human waste could make its way to the waterway. 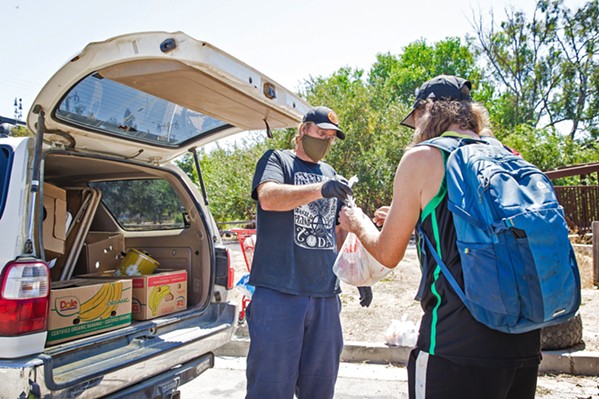 Stanwyck said that along with numerous outreach efforts at the camp throughout October, city staff hosted a Services and Support Outreach Forum on Oct. 14 at the Bill Roalman Memorial on the Bob Jones Trail, where individuals experiencing homelessness were able to connect to housing, medical, and mental health services prior to the cleanup.

But advocates like Paul Andreano—a volunteer with Hope's Village of SLO, a nonprofit that advocates for and feeds homeless individuals—say more needs to be done to ensure that residents of the Bob Jones camp have somewhere else safe to go.

"Our contention is that if you're not offering some type of other transitory place for these people to go," Andreano told New Times, "then it's not cool."

The upcoming cleanup is one of several camp cleanups that the city of SLO has carried out throughout the pandemic, despite Centers for Disease Control (CDC) guidance that homeless encampments should be left alone until the spread of COVID-19 is under control.

On May 18—just a week after the CDC updated its guidelines for addressing homelessness during the pandemic, stating that people living in homeless camps should be allowed to remain where they are to prevent further spread of coronavirus—city officials and police officers forced dozens of individuals living in a camp near the Bob Jones Trail to move along so that human waste and trash dangerously close to the SLO Creek could be removed.

Andreano said he's heard complaints about homeless people getting pushed out of popular parks, and SLO County is planning to clean up a small homeless camp behind the Los Osos Library later this month.

Though city and county officials continue to point to available beds and safe parking spots at 40 Prado, Andreano said that's just "a convenient line they use."

Many of the residents of the Bob Jones camp aren't ready or willing to follow the rules and paths required at the shelter, Andreano said, and would likely benefit more from some kind of a safe camping program, where they could legally camp out in tents overnight without having to go through the case work required at 40 Prado.

"We just don't have anything that's in between where those people are now and 40 Prado," Andreano said. "Unless you want to talk about the jail. That's it."

While Andreano said he understands the city's health and safety concerns related to the camp near the creek, it's also not a good time to be stuck living in a shelter with a bunch of other people.

After four 40 Prado residents tested positive for COVID-19 in September—the only positive cases at the shelter since March—the shelter closed its doors to new residents for a month. Without any positive cases in the last three weeks, Deputy Director Grace Macintosh said 40 Prado is now open to three new SLO County residents a day, and typically has about 10 to 15 beds available.

Still, the ongoing homeless camp cleanups caught the attention of attorneys at California Rural Legal Assistance, which is currently conducting interviews with SLO's homeless community members and advocates as part of a larger investigation.

"We are conducting an ongoing investigation of the sweeps," Directing Attorney Frank Kopcinski wrote in an email to New Times. "We have serious concerns as to the legality of the sweeps." Δ

This article was edited to correct a spelling error.