On Aug. 7, a group of about 200 to 300 people wearing face masks gathered in front of the San Luis Obispo County Courthouse to participate in a nonviolent demonstration to support local activist Tianna Arata, who was arrested on July 21 and later released with formal charges pending.

The group silently moved from the courthouse to the four corners of Osos and Monterey streets holding signs that read "Black Lives Matter" and "Free Tianna."

Arata was arrested at the end of a protest that she helped organize. The protest entered Highway 101 and had two incidents with vehicles. 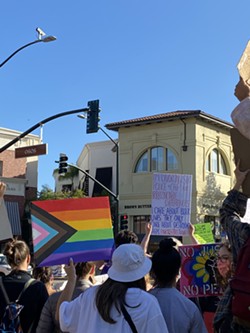 Local activist Cavin Stokes told New Times that he's seen both sides—support for Arata and backlash against her actions.

"As much as it's beautiful and people are supporting, I mean we're getting this outcry and just outreach from people joining us and wanting to know what they can do," Stokes said. "But on the other hand, there's a lot of hate. There are literally people that are saying, 'Run her over,' 'She deserves everything she gets,' or, 'She's a menace.'"

"She was singled out because she was the Black girl with the loudest voice," he said.

R.A.C.E. Matters SLO, Women's March SLO, and the NAACP SLO County Branch have all spoken out against the arrest or called for the charges to be dropped.

An online petition demanding that the district attorney not pursue any charges against Arata had nearly 300,000 signatures as of press time.

Arata's case has gained national attention and received support on social media from rapper and actor T.I., actress Viola Davis, actress Taraji Henson, civil rights activist and attorney S. Lee Merrit, and Colin Kaepernick's Know Your Rights Camp. Her story was also the No. 1 trending topic on Twitter with the hashtag #freetianna on Aug. 8 and 9.

Some supporters have stated that Arata "is facing 15 years prison," which District Attorney Dan Dow said is "patently incorrect" in an Aug. 10 press release.

"Due to public safety realignment (AB109) signed into law in 2011, the charges referred are only eligible to be sentenced to a term in county jail, not state prison. Although the San Luis Obispo Police Department has listed numerous charges that they believe the evidence supports, the decision of what charges to bring is completely within the authority and responsibility of the district attorney," the press release states.

Dow stated that all individuals charged with a crime are legally presumed innocent until convicted in a court of law.

"Therefore, it is premature to speculate or discuss what possible sentence would be appropriate or warranted," the press release states.

Dow and Assistant District Attorney Eric Dobroth made similar statements during an Aug. 11 virtual meeting of the NAACP SLO County Branch where they were guest speakers. Dow's presentation to the 125 Zoom participants focused on the duties of the District Attorney's Office and debunking misconceptions about his role in the county. However, the public Q-and-A portion of the meeting was geared toward questions about protesters' rights, how the District Attorney's Office avoids bias toward people of color, and the office's role in working with police departments prior to an arrest. Dow declined to comment on any questions related to Arata's case.

One question from the public asked if the office considered comments from people or groups asking for criminal charges to be carried out in regards to specific cases.

"As I put out yesterday, we don't pay attention to public opinion, and what I put at the very beginning of this presentation is we have a duty to go forward, even if it's against public opinion," Dow said during the meeting." Δ