SLO Rep brings back a haunting rendition of 'Blithe Spirit'

Be careful what you wish for, the old adage goes. The actors of the San Luis Obispo Repertory Theatre and playwright Noël Coward (Private Lives) stretch the saying to its limits in the 1941 comic play, Blithe Spirit.

On opening night of the show, May 4, SLO Repertory Theatre brought the play back to life on its stage after the group's founding members first performed it at the old San Luis Obispo High School auditorium back in 1948, and again in 1976 and 1994. 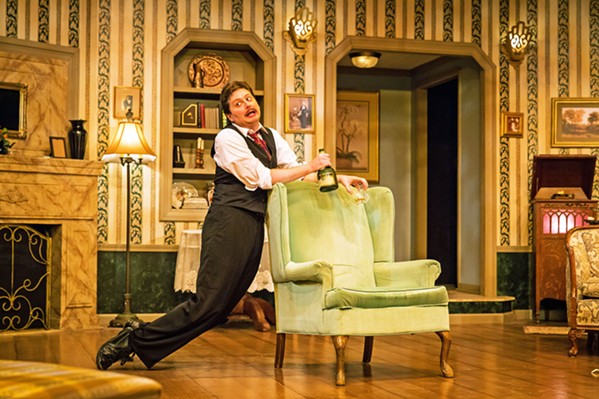 Blithe Spirit offers up the charming but curmudgeonly author Charles Condomine (Toby Tropper, The Producers), who is remarried to Ruth (Rachel Tietz, A Funny Thing Happened on the Way to the Forum) but haunted (literally) by the ghost of his late first wife, the clever and insistent Elvira (Katie Worley-Beck, The 39 Steps), after she is accidentally summoned by the zany medium, Madame Arcati (Suzy Newman, The Glass Menagerie). Set in post-World War II England, everything is seemingly prim and proper until Charles decides to host a séance as research for his next novel—cue dry British shenanigans and hilarity.

"The joy of working on plays like this one is that it gives us a chance to spend time creating and defining that world for the audience, only to quickly subvert the norms and pillars of that environment once the trouble begins," said Kevin Harris, the play's managing artistic director. "In this case, of course, the trouble is a ghost."

Once the shock wears off, Blithe Spirit continues to poke fun at the sheer impracticalities of having one's wife come back from the dead. After all, how is Ruth supposed to feel anything less than furious when her husband's long-dead wife demands to be driven to the picture show when it's pouring rain? Awkward.

Things take a comic yet sinister turn when it becomes clear that Elvira is tired of being the only restless spirit in the house. Tropper, Worley-Beck, and Tietz play off one another naturally with clever quips and comedic timing as they struggle to work out their unfortunate love triangle. And Newman as Arcati wholly transforms into her character—a whimsical, ethereal medium who talks to ghosts and falls into a trance at the drop of a hat. The entirety of the show takes place in the Condomines' parlor, which might as well be a cast member in its own right. Artfully timed flashing lights and backstage magic come together to create an otherworldly vibe as shaking picture frames, flying tables, and a rickety chandelier—which looks about an inch from dropping—seamlessly add depth to the storyline.

At longer than 2 1/2 hours, Blithe Spirit is a long show, but the comedic timing, plot twists, onstage talent, and pleasantly spooky atmosphere make the time positively fly for audiences. Δ

Arts Writer Ryah Cooley believes in ghosts, kind of. Contact her at rcooley@newtimesslo.com.