SLO Repertory Theatre's production of Annie!
the musical will show through July 1. Tickets range from
$20 to $38. Visit slorep.org for more
information.

For those in need of a dose of optimism and good vibes, take your bottom dollar and head to the San Luis Obispo Repertory Theatre to see the classic heartwarming musical Annie! 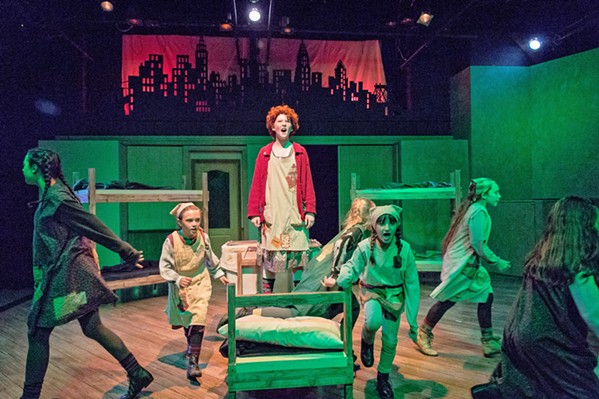 Based on the popular 1920s Harold Gray comic strip Little Orphan Annie, the show, which opened on Broadway in 1977, features music by Charles Strouse, lyrics by Martin Charnin, and a book by Thomas Meehan. Locally, Zach Johnson (2017's Oliver!) directs and choreographs the SLO Rep production, with Mark Robertshaw (2017's The All Night Strut) helming the musical direction of the show.

It's the Great Depression on the East Coast, and Annie (local Liana Lindsey in her inaugural performance with SLO Rep) is a plucky 10-year-old girl whose parents left her at an orphanage as a baby with half a locket and a note promising to return for her one day. Despite nearly a decade passing since then, Annie is able to take that love she feels from two people she can't even remember and funnel it toward taking care of and cheering on the other girls in the orphanage, who are constantly at odds with the tyrannical Miss Hannigan (Suzy Newman, who recently directed Lost in Yonkers and serves as the capital campaign coordinator for the theatre's proposed new building), who runs the orphanage.

Lindsey and the girls bring energy and radiance to classic musical numbers like "It's the Hard Knock Life" and the much loved "Tomorrow." Newman is deliciously evil and inept as the booze-swilling Miss Hannigan. 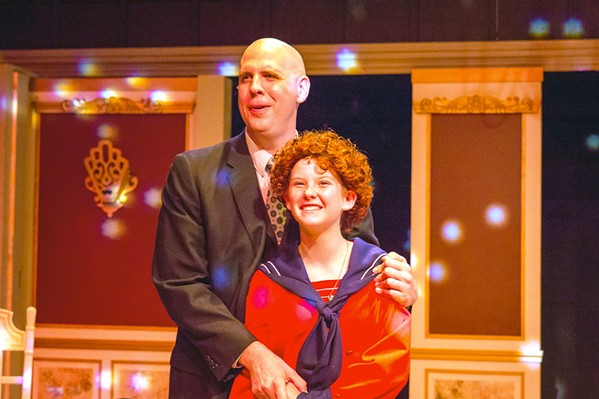 The set transforms from an orphanage with bunk beds to the streets of New York with brightly colored signs advertising late-night diners, to the home of bachelor and millionaire Oliver Warbucks (Ben Abbot, an actor with roots at PCPA making his debut performance with SLO Rep) with plush furniture. Annie is selected as the orphan who will spend the Christmas holiday season at Warbucks' palatial home. Abbot is charming in his initial aloofness and awkwardness as Warbucks around the outgoing and precocious 10 year-old girl, but he warms up quick to the idea of being a paternal figure.

But there are a few bumps in the road on the way to happily ever after, of course. Annie just can't let go of the idea that her parents might just still be out there, looking for her, prompting a nationwide search that pulls in schemers like Miss Hannigan's brother, Rooster (Mike Fiore, Lost in Yonkers), and his lady, Lily (Felicia Hall, A Christmas Story), looking to make a quick buck.

Even though it's been close to 100 years since the comic strip Little Orphan Annie made its debut, show director Johnson notes that something about the character Annie still resonates with people.

"Her adventures with Daddy Warbucks continue to inspire us," Johnson wrote in the director's note for the musical's program. "I believe Annie will be around as long as people continue to hope and dream, and as long as they need to know that 'the sun'll come out tomorrow.'" Δ

Arts Editor Ryah Cooley can be found on Easy Street at rcooley@newtimesslo.com.